Putting the “urban” in disturbance: Applying ecological frameworks to cities 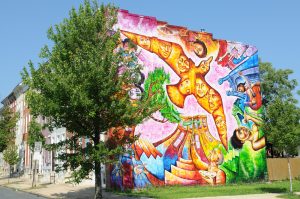 The concept of “disturbance” is a core theme of the LTER Network and central to ecological science. How does the idea of disturbance need to change when applied to the interactions of an urban metropolitan region rather than a “natural” system? Ecologists often consider the process of urbanization itself to be a form of disturbance, but that is a habit that has to change, say the authors of a recent paper in Ecosystem Health and Sustainability. People, technology, and infrastructure have to be defined as part of the system when studying cities, they say.

Drawing on examples from Baltimore, Phoenix, and other cities, the authors apply the disturbance framework of Peters, et al  (2011) to several specific examples of urban disturbance. By specifying the system to include built infrastructure, social norms, and energy and resource flows, as well as biotic components, the authors are able to explain why and how some disturbances (such as the Baltimore fire of 1904 or flooding in Scottsdale Arizona) have larger effects or unexpected recovery pathways compared to other similar disturbances.

Many of the specific observations about how urban disturbances may be magnified or mitigated will not be surprising to urban planners—but the systematic application of an ecological disturbance framework creates the opportunity to learn from patterns of past disturbances in order to better predict the effects of changes in urban structure or disturbance patterns.

Ecologists used to thinking about disturbances such as hurricanes or pest outbreaks will recognize many similar patterns in these urban case studies. And they will be familiar with the need to fully specify the scale and scope of the system they are studying (if not in the habit of including governance systems within that scope). The habit that may be most important to change, argue the authors, is that of thinking of the very existence of people as disturbance.