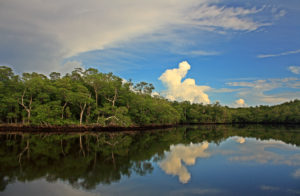 As the third largest national park in the lower 48 states, the Florida Coastal Everglades receives over one million visitors each year. But because this fragile ecosystem lies below sea level, it’s susceptible to the negative and irreversible impacts of sea level rise. Rising seas threaten the Everglades with coastal erosion, changing flora and fauna, and the release of many tons of carbon as old growth mangroves and wetland soils become inundated by the sea. To counter future saltwater inundation, efforts are underway to restore natural freshwater flows and water levels in the Florida Coastal Everglades to maintain flood protection and water supplies for the residents of South Florida while sustaining the Everglades ecosystem. Natural freshwater inputs to the Everglades come from direct rainfall and from inflows of regional rainfall stored upstream in reservoirs that manage freshwater flows into to the Everglades.

Researchers with the FCE-LTER site synthesized 16 years of hydrologic data in the Shark River Slough portion of Everglades National Park to understand how long-term hydrologic parameters (water levels, salinity, and nutrient concentrations) respond to changes in freshwater inputs, sea level rise, and climate variation (rainfall and evapotranspiration) in the Everglades. The researchers aim to use this information to inform conservation efforts on how to manage freshwater flows through the region to make the Everglades more climate-resilient.