Simulating Climate Change: Take a Walk in a Forest of the Future

What will the future feel like in our forests? In six plots at the Hubbard Brook Long Term Ecological Research Site in the White Mountains of New Hampshire, the trees already know. Dr. Pamela Templer has created a robust simulation of the climate—warmer summer temperatures and later snowfall—that these forests will experience within the century. 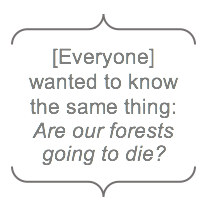 In 2012, she and her lab initiated the “Climate Change Across the Seasons Experiment” (CCASE) at Hubbard Brook. Four kilometers of heating cables snake through the forest to warm test plots by 5℃ during summer. And in winter, researchers trek into the forest during the first four snow storms to shovel snow off the same areas. Previous experiments have examined the effects of warming alone on forests, but CCASE simulates both warmer soils in the growing season and colder soils in winter, allowing researchers to see how climate change across seasons interacts.

The conclusions of this experiment will be important for all of us: Northeastern forests currently act as carbon sinks, but if changing conditions combine to upset tree physiology or soil processes, forests could release more carbon than they absorb—further accelerating warming.

Without A Snow Blanket, Winter Gets a Lot Colder

Templer has spent years studying temperate forests in winter. She wanted to know how decreased snowpack due to warming temperatures might affect the trees and by association, uptake and loss of nutrients from soils. 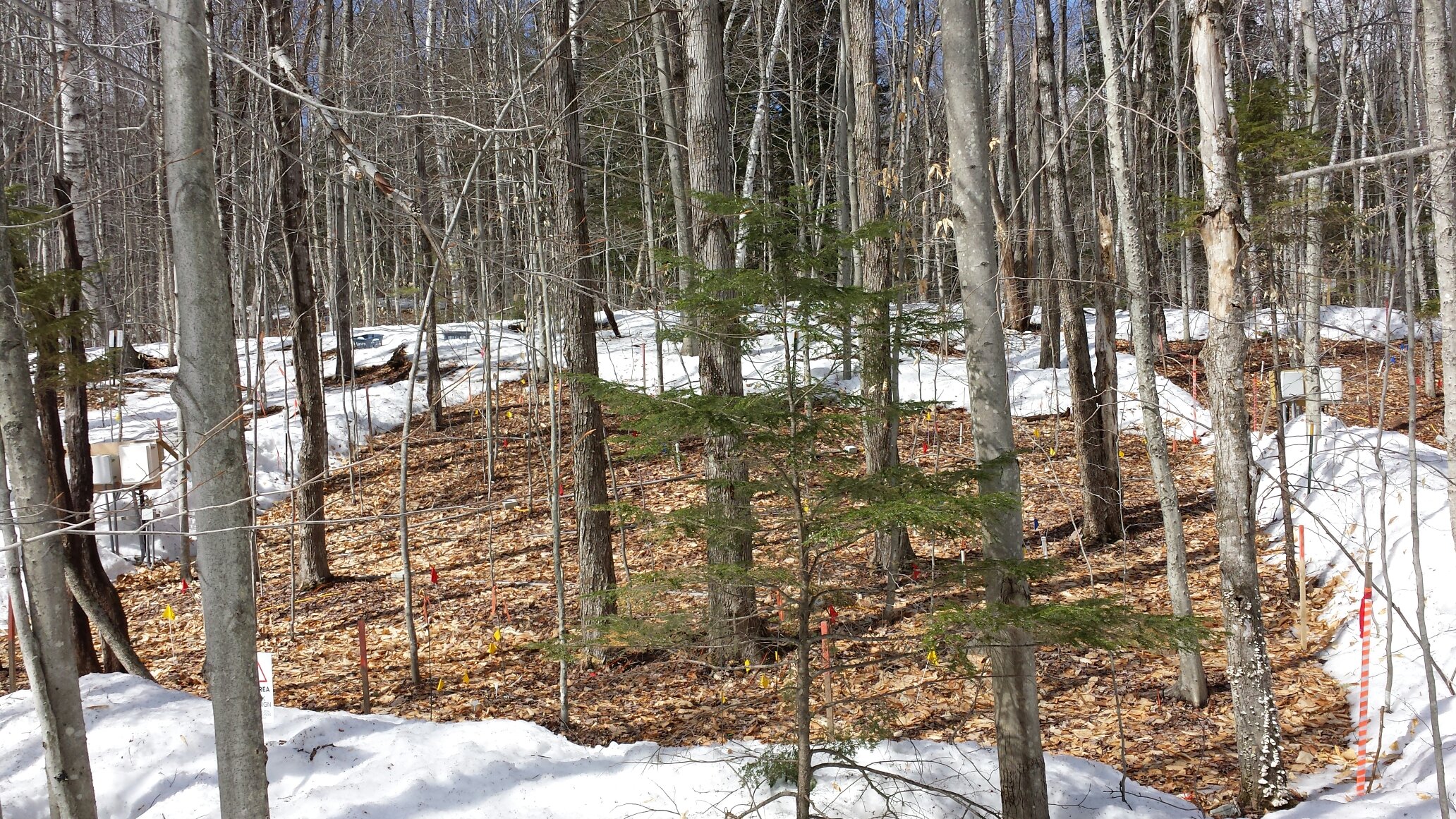 In her initial experiments at Harvard Forest and Hubbard Brook, she simulated a delayed snowfall by removing snow from multiple plots for several weeks at the beginning to winter. Soil without the insulating cover of snow is vulnerable to freezing temperatures. Absence of snow thereby causes colder conditions in forests, because the soil freezes and often stays frozen through the season.

When soils freeze, so do tree roots—which in turn has a broad cascade of effects. In plots where roots froze, the team documented decreased microbial biomass, lower arthropod abundance and diversity, damaged tree roots, less nutrient uptake by trees, and more nitrogen leaching at the beginning of the growing season.

In presenting these results, Templer found herself surprised by the strength of her audience’s response: “They all wanted to know the same thing: Are our forests going to die?”

Turning up the Heat. Literally.

Templer realized that while winter is crucial, it only represents a small piece of the year: warming temperatures and increased carbon dioxide are expected to boost the productivity of forests during the growing season. She needed to find a way to answer a larger question: will a warmer growing season be able to offset the negative winter impacts of climate change?

The CCASE team maintains three treatments: control plots, warming-only plots, and plots that are both warmed during summer and emptied of snow in early winter. This kind of experiment was no simple endeavor. “Snow removal experiments—graduate students and technicians with shovels—are cheap. Massive heating infrastructure,” Templer admits, “is expensive.” Even once they got the go-ahead for the funding from a NSF CAREER grant to Templer, it took a year and a half to install all the cables and allow the forest to de-stress before her team started experimental treatments.

An Experiment in Infancy

Now, after two and a half years of data collection, the lab is beginning to analyze initial results. Thus far, they’ve discovered that while summer heat increases photosynthesis—and therefore, carbon uptake—freezing has the opposite effect. When a tree’s roots freeze, the tree captures 22% less carbon than a tree with intact roots, all because of the root damage. Not unexpected findings, but startling to Templer in their magnitude.

Vexing irregularities have also emerged. For instance, contrary to expectations, freezing appears to affect some of a tree’s nutritional processes (e.g. nitrogen uptake) and warming affects others (e.g. water use). The more time trees’ roots freeze, the less nitrogen they take up and the more nitrogen leaks out of the forest soil come spring. Warming appears to have no significant impact on this phenomenon. In contrast, sap flow, a way of measuring a tree’s water use, increases significantly in warmed trees, but shows no response to freezing. Why the lack of parallel results for two phenomena that seem like they should share pathways?

“These kinds of questions,” Templer explains, “are impossible to answer in just a few years — this is why LTERs are so crucial.” There may be lags in the system that won’t be evident for decades. For example, pulses in respiration or photosynthesis due to warming could go away in time as soil microbes and/or plants acclimate to changes in temperature. The monitoring and data collection needed to fully understand our forests and their long-term interactions with overall climate have just begun.

For more details on CCASE, check out the Templer Lab website or Sap-Net.