We set out to answer the general question: How do metacommunity dynamics mediate community responses to disturbance across the ecosystems represented in the LTER network? Metacommunity theory provides a framework to predict when different types of community assembly processes should control the composition of the species pool both at local and regional scales. Thus, metacommunity theory has the potential to explain why different trends in long-term biodiversity data occur across different taxonomic groups in ecosystems that experience different disturbance regimes. Initially, our specific objectives for the synthesis group were to: 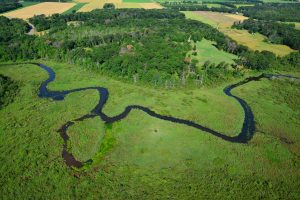 In hindsight, our first objective was more ambitious than we realized. At our first working group meeting, to tackle the first objective above, we intended to spend our time using existing tools (i.e., R packages) to

quantify variability for as many LTER biodiversity data sets as we could. However, during that first meeting, participants identified a gap in how we assess variability in metacommunities—there was not a good metric to describe scaling of temporal variation in community composition in a metacommunity. Consequently, a large effort from our group has focused on developing a compositional variability metric and an R package to easily apply the analysis to long-term site-by-species-by-time data sets.

In addition to the tangent of developing a new metric and R package, we found it was much more difficult than we had anticipated to find long-term data sets that were intercomparable and appropriate for our analysis. Luckily, as part of a separate project, Tom Miller and Aldo Compagnoni were in the process of building the Popler R package to access and query a database of LTER population and community data sets. We were able to beta-test this tool and it provided an invaluable resource for finding candidate data sets for our project. However, even after identifying good candidate data sets, it took considerable effort to develop reproducible workflows to access, clean, and harmonize the data.

These challenges led us to re-evaluate our goals for subsequent meetings. Given the interests and skill set of the working group members, we have prioritized:

We had four in-person meetings. They included graduate students, postdocs, and mid-career scientists who self-identified as researchers who were interested applying the metacommunity framework to their system (i.e., their taxonomic group of interest at their LTER site). Each meeting kicked off on Monday morning with a set of presentations to provide a foundation for the rest of the week, and an afternoon of discussions to determine goals for the week. The remainder of the week involved break-out groups to focus on coding, data-munging, and writing, with periodic report-outs to the group as a whole to gauge progress. In the interim, between meetings, we have kept up semi-regular zoom calls to maintain progress on the project.

Our last objective was to assess empirical links between predictors and measures of metacommunity stability/variability using modeling. Our group has spent some time discussing this topic, but it has largely been descoped because we have just run out of time. That said, a spin-off from our group is exploring how our synthesis results might inform how mechanism-based metacommunity models might be applied to predict how biodiversity will respond in non-stationary ecosystems.

I would recommend future synthesis working groups find funding to support a dedicated postdoc or graduate student. Our group was comprised largely of early career scientists (postdocs) who got jobs — which is a great problem for the group to have — but progress on working group goals has been slowed as participants’ careers have matured.

Publications in review or to be submitted

The curated LTER metacommunity data set and derived metacommunity variability metrics, along with the code to reproduce the data set from original source data are currently available on our github page, but will be submitted to the EDI data portal when Sokol et al. is submitted for peer review.