The grazing effect: How bison impact plant water use 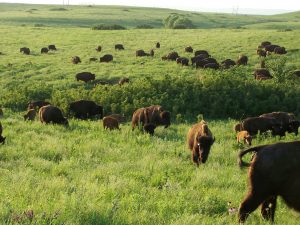 When one envisions a grassland community, imagery of tall grasses and bison often come to mind. Bison are an iconic species on the landscape, and they also impact the structure and function of the grassland ecosystem in important ways.  Using natural variations in the abundance of oxygen isotopes, researchers at the Konza Prairie LTER found that  grazing influenced plant water use through changes in diversity.

The researchers found that grazers increase the proportion of shallow water used by two grassland species, A. gerardii and R. glabra, allowing them to access water sources that weren’t being used by other species. The shift in proportional water uptake was related to differing plant communities in grazed and ungrazed watersheds, rather than the amount of soil moisture or root biomass. Grazed locations have greater plant diversity, which creates more numerous and smaller hydrological niches, possibly leading to lower competition for water. Thus, niche partitioning may be very sensitive to changes in plant diversity within this heterogeneous ecosystem.

The presence of grazers—but not fire history—modified the functional niches in this tallgrass prairie plant community by altering the depth of water uptake and degree of niche overlap. The results of this study demonstrate that disturbances such as grazing can have strong impacts on plant functioning at small scales, which can have important consequences for local watersheds and grassland communities.