Timing is Everything: Long-Term Monitoring Key to Understanding Ecosystem Resilience

In ecology, timing is key to understanding how daily, seasonal, or yearly cycles impact environmental processes. But it’s not just about how often impacts occur, but also over what length of time. Decades worth of data synthesized by researchers at Coweeta LTER provide some of the clearest evidence to date that long-term observations of ecosystem responses to disturbance can reveal unexpected system behaviors, leading to new insights, hypotheses, and research directions in ecological resilience studies. 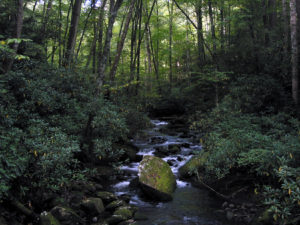 Beginning in the 1970’s, researchers at Coweeta began an experiment that sought to quantify how much different forest ecosystem processes would shift after a disturbance, and how quickly they would bounce back to their pre-disturbance state. The team clear-cut trees from an entire watershed in the study region and constructed new logging roads to simulate the typical timber harvest methods of the time. Their goal was to examine ecological resistance and resilience across a suite of ecosystem properties–including streamflow, stream nitrogen exports, soil carbon and nutrients, forest and streambed species composition, and macroinvertebrate communities—in the harvested watershed compared to a non-harvested control site.

Researchers expected that the forest disturbance would alter water and chemical cycles for a number of years but that the system would return to a similar condition as the pre-harvest state within a reasonable amount of time. For the first 12 years following the clear cut, forest regeneration, stream flows and dissolved inorganic nitrogen (DIN) concentrations temporarily increased (due to lower uptake from vegetation) and then began returning to pre-harvest behavior, as expected based on resilience theory at the time.

That’s when the surprises began. More than a decade after the experiment began, reforestation patterns interacted with pests, diseases, drought cycles, and climate change to shift toward a system persistently higher in DIN concentrations than the control site. DIN concentration in the harvested site depended more on patterns of water flow than on biological cycles, also contrary to the control site.

Because scientists have been able to monitor this site for over 40 years, they’ve gained a more accurate and complete understanding of forest succession and regeneration. These unanticipated ecosystem dynamics, and the novel research and experimental design they’ve inspired in the last decade, were only revealed because of long-term monitoring. It appears that after several decades the watershed shifted to a new and persistent state of elevated nitrogen export and reduced water yield. While researchers are still analyzing the possible causes for higher nitrogen export and lower water concentration in the disturbed forest, they believe that the trends can be at least partly explained by changes in tree species composition combined with the influence of natural topography (direction and steepness of slopes in the watershed).

Although long-term and large-scale research certainly presents challenges and limitations, such approaches are crucial for understanding the enduring effects of human or natural perturbations on ecosystem dynamics, water quality, and habitat resilience. Long-term data can identify and illuminate ecosystem responses to slow ecological processes, highly variable processes, subtle or complex phenomena, episodic phenomena, and climate or landscape management changes. Imagine what new insights researchers might glean after another 40 years of observing forest succession.