Using Drones to Understand the Timing of Fall and Spring

As this winter continues to bring freezing temperatures and intense “bomb cyclone” snow storms to the eastern U.S., many are wondering: “When, exactly, will spring arrive?” Researchers with the Harvard Forest LTER were wondering the same thing as they conducted a study using drones to track timing of phenological events in a mixed forest ecosystem in Harvard Forest, MA.

The timing of periodic life cycle events such as spring leafing, flowering, or fall leaf color change can vary from year to year, with consequences for growth and reproduction of key species and carbon and nutrient cycling in ecosystems. 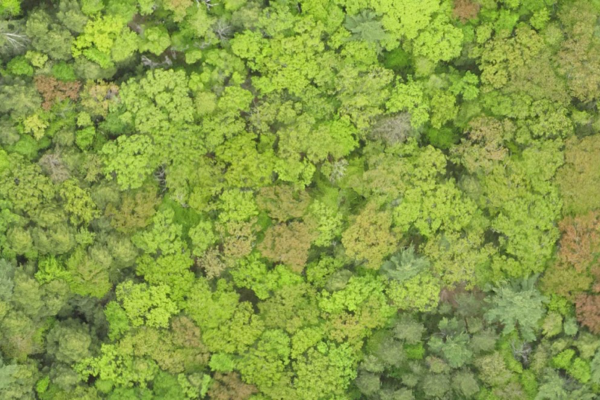 Most observations of phenology are either large-scale — from satellites and aircraft — or boots-on-the-ground, such as through Project BudBurst.  This research team took a different tack, using drones to ask how phenology varies between and within different types of plant communities (deciduous trees, evergreen trees, wetland) in the Harvard Forest, and how phenology varies at different spatial resolutions (organism level to ecosystem scale).

The aerial imagery from this study revealed that the large spatial resolution used by remote sensing often blurs observations of plant species so that fine-scale  phenological variation is overlooked. By scaling phenology at the organism and ecosystem level, the researchers are helping scientists understand how ecosystem functions, such as photosynthesis, carbon uptake, and nutrient cycling, are affected by variations in plant phenology.

Plant phenology is often used as a sensitive indicator of global climate change. By better understanding how phenology varies at different scales, researchers can clarify its relationship to environmental changes now and in the future. As drone technologies become more advanced and commonplace, you can expect to see more of them abuzz with ecological data!