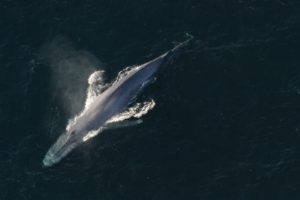 Every year, the Eastern North Pacific population of blue whales migrates between their winter calving grounds off the coast of Mexico and their summer feeding grounds in the California coastal region. Scientists know that they time their migration to coincide with peak prey abundances, but the cues they use for this have been unknown—until now.

A team of researchers from the California Current Ecosystem LTER discovered that blue whales use temperature signals to time their annual migration. They also found a decadal-scale increase in temperature due to climate change has led blue whales to extend their overall time in Southern California. The findings are published in a new paper led by PhD student Angela Szesciorka from the Scripps Institute of Oceanography.

Seasonal upwelling of cold, nutrient-rich water off the California coast makes the area a hot-spot for krill, the main food source for blue whales. How abundant krill are in a given year depends on sea surface temperatures from the prior year. Colder water correlates with higher krill biomass the following year. It turns out that the blue whales are keyed into this relationship, and use it to optimize their overlap with krill in Southern California. This means that the whales are able to remember water temperature in their feeding grounds from the previous season, then forecast future conditions and adjust their arrival timing the following year.

The research team recorded whale vocalizations in the blue whale feeding grounds off California for ten seasons. The whales produced two types of discernable vocalizations, labelled “D” and “B” calls; D calls are produced by both sexes during the months when they forage and are considered social or contact calls, while B calls are used in songs produced only by males and are believed to have a primarily reproductive-related function. D calls dominate early in the year and B calls later in the year. When the previous feeding season was colder, D call onset (i.e., arrival of whales) in Southern California was earlier the following year, and it was later following warmer years.

Blue whales’ arrival to the feeding grounds also showed a long-term trend of earlier onset over the 10-year period, shifting more than one month (42 days) from June to April. Across the same 10-year period, mean annual sea surface temperature increased by 1 °C. The researchers think that this long-term warming trend is driving whales to arrive at their California feeding grounds earlier and spend more time in the region than they did a decade ago.

As blue whales respond to changes in krill biomass and distribution, they are likely to increase their spatial overlap with anthropogenic threats prevalent in the Southern California region, including a high volume of ship traffic. Blue whales are an endangered species, so it will be important to understand how changing migration patterns may put them at higher risk, and how to mitigate those risks. These new insights into whale behavior and environmental change provide a valuable foundation for future work to protect blue whales and other marine species in the Eastern Pacific region.