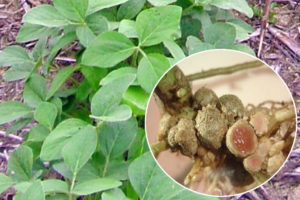 Agricultural practices—such as no-till, low-input, and organic cultivation—can change the ecology of the mutualism between soybean plants and their nitrogen-supplying rhizobium by altering bacterial communities, soil conditions, and plant behavior. But could cultivation practices also affect the evolution of this key relationship, changing the very nature of the microbes?

Researchers took advantage of a 24-year experiment maintained by the Kellogg Biological Station LTER to assess the possibility. They did not find evidence that any of the four cultivation practices they studied (conventional, no-till, low-input, and organic) resulted in nitrogen-fixing microbes that were less cooperative with their host plants—a possible, even likely, outcome based on ecological theory and previous studies.

The authors isolated samples of the microbial community from each cultivation type, inoculated test plants growing under common conditions, and observed the effects on biomass, number and size of nitrogen-fixing nodules, chlorophyll content, and estimated rates of biological nitrogen fixation. They also compared the effects on non-nodulating mutant soybeans to be sure any effects they might observe were related to the mutualism. They didn’t observe any  significant treatment differences in nitrogen-fixing soybean plants, though they did see some minor treatment effects in non-nodulating mutants.

The inconclusive result doesn’t rule out the potential for cultivation practices to drive evolution, as several factors may have made it difficult to detect small evolutionary changes. The researchers point out that sample sizes were small (3 plants per strain for a set of trials on individual microbial strains) and—while 24 years is a long experiment, it is a very short time for evolution to manifest, especially when rhizobia spend most of the time as free-living soil bacteria.

Still, the result provides some reassurance that including soybeans in crop rotations will continue to supplement other more energy-intensive kinds of fertilization, no matter the type of cultivation practiced or the history of land use.