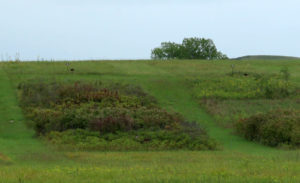 Restoring grassland biodiversity after long-term agricultural use requires some human intervention, often by adding seeds or altering soil to promote the establishment of native species. In a 20-year soil manipulation experiment conducted at the Konza Prairie LTER site, more variable soil resources resulted in greater plant diversity and richness, but the results took more than 15 years to emerge. This lag may help explain why short-term environmental heterogeneity experiments have failed to show positive effects on biodiversity.

As industrial agriculture is abandoning land, researchers seek to support restoration of the diverse plant communities that agriculture replaced. Through cultivation and fertilization, traditional  agriculture tends to create more homogenous soil, so restoration has focused on re-establishing soil variability with the intention of increasing the variety of niches available for more plant species to exploit.

Nitrogen enriched soil appeared to yield the most substantial improvements in plant diversity and richness over the 20-year time scale. In the first three years of the experiment, species richness actually declined in the nutrient enriched plots as a result of dense grass cover, while the plots with reduced-N soil maintained higher species richness due to lower grass cover over the long term. However, after 15 years of persistent N enrichment, grass cover declined, enabling species diversity to increase once again.

Set up in 1998 in an abandoned agricultural field at the Konza Prairie Biological Station, in northeastern Kansas, the experiment included multiple 6 by 8 meter plots, composed of subplots with varying levels of N-enrichment and soil depths. In 1998, 42 native prairie species were sown in all the plots, to mimic never-cultivated tallgrass prairies. A second addition of 15 forb species seeds were sown in 2005 and finally 17 additional plant species were added in 2013 and each subsequent year, allowing the researchers to differentiate between the effects of niche availability and barriers to establishment. As biodiversity was most bolstered by nutrient additions that reduced grass cover, the researchers concluded that niche availability was not the primary mechanism connecting soil diversity with plant diversity.

In a native tallgrass prairie ecosystem, factors that limit grass growth and dominance engender higher plant diversity. This conclusion could change the way that managers approach prairie restoration projects in the future, as nutrient enrichment typically reduces, rather than enhances plant diversity. This experiment was conducted on a small scale and the authors emphasize the need to find ways to promote landscape patchiness rather than suggesting that broad-scale nutrient enrichment is likely to lead to increased diversity in restored agricultural landscapes.