Researchers at the North Temperate Lakes (NTL) LTER site have capitalized on the utility of Peter and Paul experimental lakes in northern Michigan in order to improve predictions of ecological tipping points in lake ecosystems. Their two-year study analyzes changes in the lakes’ spatial characteristics, and identifies statistical patterns in those characteristics as potential predictors of ecological thresholds. 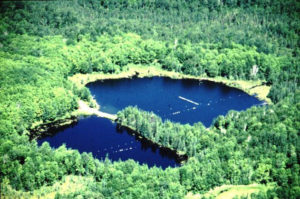 Dynamic ecosystems like lakes are often subject to disturbances that can cause changes in their present state — in essence, their composition, structure, and internal processes. An ecosystem’s state transitions are characterized by critical “tipping points,” or thresholds in which a minor disturbance could cause a catastrophic state change. The NTL study is the first of its kind to evaluate the effectiveness of spatial indicators to detect state change in lake systems, with harmful blooms of cyanobacteria characterizing the tipping point.

In the first year of the study, NTL researchers manipulated Peter Lake by increasing nutrient input in order to simulate eutrophic conditions, inducing a state change which manifested as thick blooms of cyanobacteria. Peter Lake then remained undisturbed for the remainder of the study, while adjacent Paul Lake was unperturbed as a control site throughout the two-year experiment.

The researchers mapped cyanobacteria concentrations over the entirety of the lakes’ surfaces, detecting differences and patchiness in the spatial distribution of the cyanobacteria of Peter Lake as nutrient input increased.

Statistical analyses of these distributions revealed that parameters such as standard deviation and skewness of the collected spatial data increased dramatically as Peter Lake approached the cyanobacteria bloom. Researchers also observed an increased frequency of extreme events (in this case, the spikes of cyanobacteria distributed in patches across Peter Lake), a parameter referred to as EVD-shape in the study, as the lake approached the tipping point. The study from NTL is again unique in that it is the first of its kind to evaluate EVD-shape as a potential predictor of ecological thresholds.

This study provides a platform on which to build more research on spatial indicators of tipping points. The authors reference the potential for emerging remote sensing technology to be used in conjunction with similar studies in order to reduce costs and increase effectiveness of spatial analyses, and also mention the need for further testing in different lake environments to confirm the generality of their findings. Though more research is needed, this study demonstrates the capabilities of spatial data to predict ecosystem dynamics.