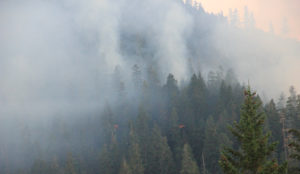 The staff of the H.J. Andrews Experimental Forest LTER site had almost no time to prepare when a massive wildfire swept through the region in early September. Stoked by dry late-summer conditions and extreme high winds, Oregon’s Holiday Farm fire began spreading rapidly as soon as it sparked near Andrews Forest. Within hours of the fire’s ignition, Forest Director Mark Schulze and thirteen other Andrews Forest researchers and staff were forced to evacuate in the middle of the night from their homes at the forest headquarters and nearby communities.

After two days of explosive growth, the fire slowed down but pressed onward to burn more than 400 acres across three long-term experimental watersheds inside the Andrews Forest, including two “reference” watersheds occupied by old-growth forests. In the wake of the fire, LTER researchers are now working to restore critical research infrastructure and learn how the ecosystem will respond to this new disturbance.

In November, a month after the Andrews Forest fires finally settled down, I joined my fellow Oregon State University graduate student Ted Bambakidis for a day of fieldwork in the burned watersheds as part of a project on post-fire changes in stream chemistry and microbes. When we arrived, the smoke had dissipated, but the smell of burned Douglas fir still hung in the air. Holding our sample collection bottles, we walked gingerly alongside a stream and past a blackened hillslope from which surviving trees rose above charred stumps. On the other side of the stream, the unburned forest seemed to stand in opposition, as cool and green as ever. 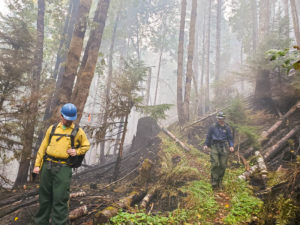 Thanks to firefighting efforts, no LTER buildings were lost, and the fire mostly burned along the ground in a low-intensity spread. “We were lucky in that only a small portion of our research infrastructure was damaged in the fire,” said Forest Director Mark Schulze. Tree tags and plot markers melted in long-term vegetation plots; parts of a network of temperature sensors were destroyed; and fire dozer lines disturbed vegetation and soil. The fire melted power lines, destroyed a propane tank, and burned up to the base of the stream gauge house in Watershed 1. In Watershed 9, the fire also burned up to the stream gauge house and a tree fell on its roof, but the house remained mostly intact.

Alongside the physical disturbances, the fire caused gaps in long-term datasets by disrupting sampling efforts. Several surveys for long-term projects were canceled for the fall, including a small mammal demography study and an annual sampling associated with a fish and salamander monitoring project that has been ongoing since 1987. The fire added to complications from the COVID-19 pandemic, which had already impacted summer research and largely canceled an annual tree cone count that had been underway since 1959.

Few researchers will be allowed back into the burned section of forest before spring 2021 to avoid potential hazards from falling trees, landslides, or disturbing still-smoldering areas. Those who do return have to get special permission to conduct urgent post-fire work, and they must be accompanied by someone with wildland fire response qualifications.  “Many of us will not know what the effects of the fire are until we return to conduct fieldwork next summer,” said Marie Tosa, a graduate student studying small carnivores at Andrews Forest.

Studying interconnected disturbances, past and present

Now that the immediate fire danger has passed, Andrews Forest researchers are regrouping and refining their research objectives to understand how the ecosystem will respond to the fire’s impacts. Over the next year, long-term vegetation plots will be re-established and re-inventoried to see which plants survived and identify any newcomers. Carbon and nutrients will be measured in streams to see how material from burned watersheds will change the forest’s biogeochemical cycles. Animal populations, particularly songbirds, will be surveyed to see how they respond to altered habitats both within and outside of the Forest. 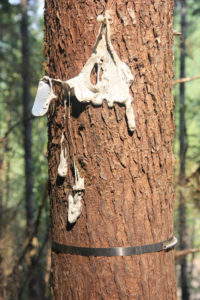 This tree label melted during the fire.
Credit: Andrews Forest LTER by HJA Staff via CC-BY

These post-fire studies will take place within a long history of disturbance research at Andrews Forest. Starting in the 1970s, researchers used old-growth tree rings to reconstruct the forest’s fire history for the last 500 years. Stream gauges have recorded flooding since the 1940s. A multitude of other disturbances, including windstorms, logging, insect outbreaks, landslides, road building, and even volcanic activity, have been studied for decades in the forest. The Andrews Forest LTER, which was recently renewed for another six years of funding, will continue to maintain these long-term records and use them to inform predictions about how the ecosystem will respond to the most recent fire.

Researchers like Dr. Julia Jones, who has been studying hydrology and biogeochemistry at Andrews Forest since 1989, are particularly interested in how the fire’s effects will relate to other disturbances, both past and present. Secondary disturbances, like erosion, landslides, and flooding, may occur after the fire. These disturbances connect to the history of the landscape. “You can think of it as studying both the living and the dead from the last event,” said Jones. “Each new disturbance interacts with the legacies of the previous disturbance.”

Moving forward at Andrews Forest and beyond

Although Andrews Forest was relatively lucky, nearby landscapes and communities were overwhelmed by the Holiday Farm fire, which burned more than 170,000 acres and 700 structures in total. Some staff members lost their homes after being evacuated. To aid displaced Andrews Forest staff and their families, a GoFundMe page raised more than $12,000 in just two days, with many donations coming from other LTER network members across the country.

As global temperatures rise and fire seasons intensify, other LTER sites are being increasingly affected by wildfire. In October, the Lefthand Canyon fire came within three miles of the Niwot Ridge LTER site in Colorado. Niwot Ridge escaped any direct fire impacts, but its Mountain Research Station closed as a precaution, and long-term sensor maintenance and sample collection were interrupted for two weeks until research assistants could get permits to re-enter the area. “It feels like a ticking time bomb,” said Sander Aplet, a Niwot Ridge research assistant who was among the first researchers to re-enter the site after the fire closures. “All it takes is a random lightning strike to spark a fire that could be really devastating.”

In the aftermath of the fire, knowing the long history of disturbance and recovery in the Andrews Forest ecosystem may seem like cold comfort. But LTER researchers know that the many of the legacies of forest disturbance and succession extend across centennial timescales, far longer than we can see ourselves. “That’s part of the joy of working with an LTER program,” said Dr. Julia Jones. “You’re working for something so much bigger and more enduring than you are.” 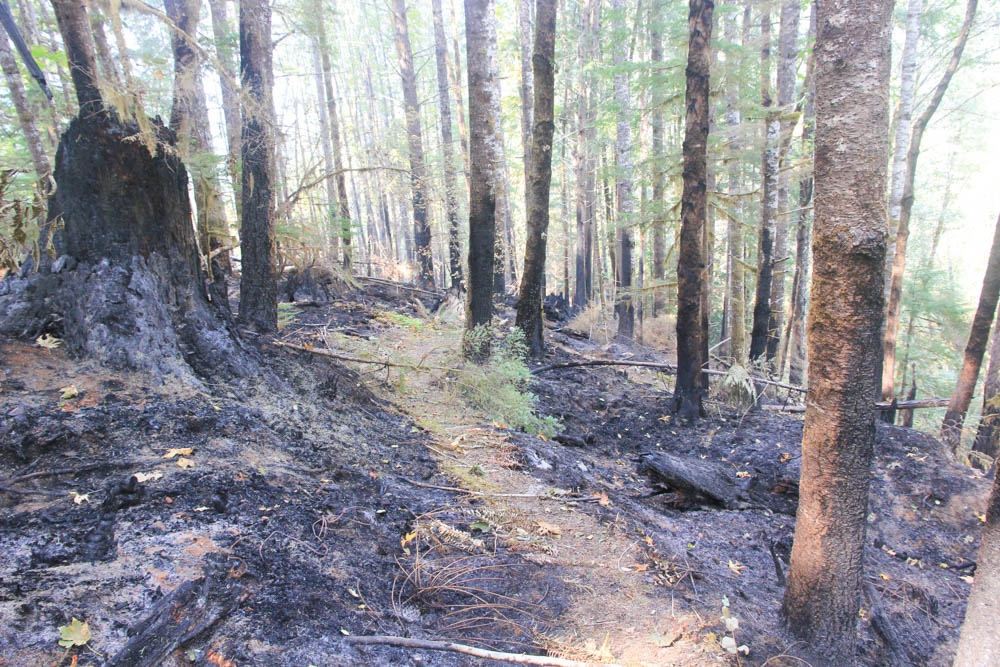 A thick layer of ash blankets the forest floor on both sides of a trail through Watershed 1 after the Holiday Fire.
Credit: Andrews Forest LTER by Mark Schulze via CC-BY

Photos for this story were provided under Creative Commons licensing CC-BY by the Andrews Forest Long Term Ecological Research program supported by the National Science Foundation under Grant No. DEB-1440409.