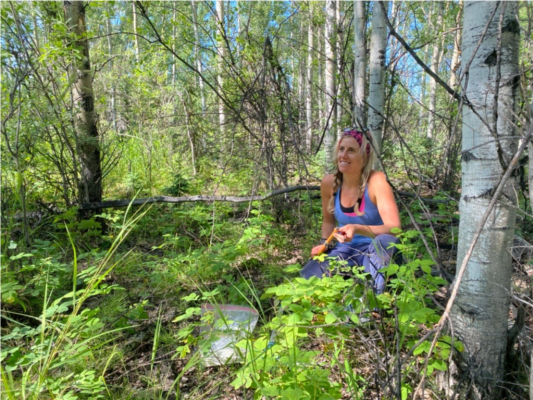 Leaving my house, I feel like a runaway. I am packed inside an economy-sized rental car with my field clothes, camping gear, and of course, face masks, heading 300 miles north to meet my advisor Michelle Mack and fellow lab members for a couple days of fieldwork. It is a six-hour drive to a small town just north of the Eastern Alaska Range. Due to the coronavirus pandemic, I have not seen them outside the virtual world of Zoom for almost four months. The outing feels like a weight has been lifted and I can finally breathe freely again. It is a welcome, though fleetingly brief, moment.

I greet the team at our meeting place – the parking lot outside the local IGA grocery store in Delta Junction. We stock up on Russian candies, kombucha, and unbelievably good bakery doughnuts before heading out to the research sites. “Ready?” lab manager Samantha Miller calls down to us from the field truck that towers over my tiny red hatchback and Mack’s purple Civic. We smile in response.

Miller is here with fellow Northern Arizona University researchers Xanthe Walker and Melissa Boyd, conducting fieldwork on wildfires in Interior Alaska. As their lab mate in Mack’s research group, I am joining them to help with field sampling. Today, we are visiting a fertilization experiment that Mack began in 2002 after a then-recent fire. This experiment is part of the Bonzana Creek LTER and consists of three field sites that each experienced a fire at a different point in time. The oldest site burned in the 1920s; the second in 1987; and the most recent in 1999. Together they represent the different stages of forest recovery after fire. Mack designed this experiment to test how added nutrients might change post-fire succession across time. This summer marks the experiment’s 18th anniversary—a milestone in ecological research. Mack is considering conducting a larger research project on the long-term changes these sites experience, but first wants to conduct some initial sampling to discover which ecological changes could be the most interesting to study. Over the next two days, we will collect a limited number of preliminary samples while adding the yearly dose of fertilizer to the plots.

We visit the middle-aged site first. It is a mixed forest. Tall aspen trees overshadow the more slowly growing spruce. If you did not look closely, you might not realize there had ever been a fire here. Wild rose bushes and grasses scatter the understory and leaves litter the ground. Weaving through the plot, Miller and Boyd scatter handfuls of fertilizer granules over the ground. Meanwhile, Mack, Walker, and I tackle the sampling. We slingshot rocks into the towering canopies of aspen trees, collecting the leaves that drop to the ground as samples. Mack plucks needles from the tops of much shorter spruces. Walker cores trees, delicately and harmlessly removing a sliver of wood from the trunk of each tree with a long, thin pipe. Back in the lab, she will look at the tree rings within these cores to analyze tree age and chemical components. I take the top few inches of soil and scoop it into plastic bags. All these samples will be used to search for differences in things like leaf nutrition and soil carbon content among the experimental plots. Differences in these properties might indicate broader changes in how these ecosystems recover post fire. 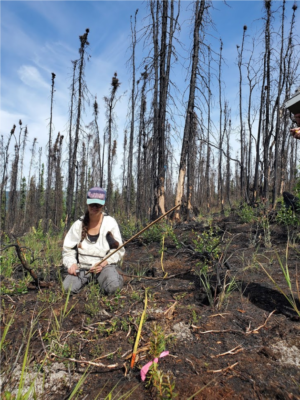 We repeat this process at the other two sites. The 1999 site is crowded with growth, burgeoning with deciduous shrubs and young trees. The forest has not yet grown into a tall canopy. In contrast, the oldest site feels more spread out, calmer. Spruce trees dominate over a mossy understory, speckled with dwarf evergreen shrubs. After almost two decades of experimental manipulation, the line of demarcation between a fertilized plot and the surrounding unmanipulated area is starkly obvious. The sites differ greatly in their plant communities, and the specific changes depend on how long ago the plot was burned. Fertilization in the 1987 burn area seems to boost productivity of the plants growing in the understory. Knee-high grass overflows from one side onto the shorter brush on the other. In stark contrast, fertilization in the 1920s burn decimates the more sensitive feathery moss that typically carpets the forest floor, leaving it nearly bare.

Later back at camp, Walker, Boyd, and Miller take turns with the slingshot, competing to hit empty seltzer water cans on the cobbled floodplain of the Gerstle River. As we eat our separately prepared dinners (taking extra care to sit six feet apart as a pandemic-related safety measure), Mack talks about the changes these sites have seen throughout the years. Though now shrubby and full of juvenile trees, the vegetation in the most recent burn went through a period where the understory was once entirely composed of Epilobium angustofolium, commonly known as fireweed. Enjoying the mental image of the flower’s summery magenta and autumnal fiery red, I stay with the feeling of what it means to tend to an experiment for two decades, the depth of knowledge and connection to that site.

Over the past 20 years, more than just experimental plots have changed in this ecosystem. As Alaska’s climate warms and becomes drier, the boreal forest’s fire regime is changing. While fires have historically occurred approximately every 100 years, areas in the region are burning more frequently and more severely. With this change in fire cycle comes a subsequent change in the scientific questions that excite Mack. “Science is not stationary—so our questions shouldn’t be stationary,” she reflects. “How do we help our long-term questions evolve? How can [our] enthusiasm for a question grow and change, and be ready for surprises?”

Walker and Mack were recently awarded a National Science Foundation grant to ask some of these new pressing questions. In particular, they want to identify if and where old soil carbon, what they call “legacy carbon,” will be released as Alaska experiences increased fires. Over centuries, the boreal forest has sequestered large amounts of carbon in its soils through the pattern of burn and regrowth. Historically, some of the forest’s soil, where most of the carbon in this ecosystem is stored, remains unburned during a fire. That carbon becomes legacy carbon, an heirloom from previous fire cycles buried deep by the ongoing development of thick organic soils as the forest regrows. The more legacy carbon that remains in these soils, the more carbon these forests keep from escaping into the atmosphere. However, as fires become more frequent and more severe, legacy carbon is likely to be released faster than it can re-accumulate, which would intensify climate change.

After completing our fieldwork in Delta Junction, the crew heads back toward Fairbanks to scout sites for Walker and Mack’s new project. They want to identify whether legacy carbon burns in Alaskan fires, and if it does then how much. Their first stop is Shovel Creek, just northwest of Fairbanks. Last year, the Shovel Creek Fire burned over 22,000 acres, an area roughly half as large as Washington, DC. I was in Fairbanks for much of the duration of the fire. The smoke choked the town for weeks, permeating into buildings, blocking out the sun, making it impossible to go for even a short run. I still remember the constant feeling of grime in the air. Several communities had to evacuate. Some had to rush to move their sled dogs to safety. Without intense fire intervention, the Shovel Creek burn would have destroyed hundreds of Alaskans’ homes.

Walker hopes her forthcoming research will provide fire managers with more information to mitigate risks to vulnerable areas. She is particularly interested in the Shovel Creek fire for a specific reason: it has burned before. As fires become more frequent in Interior Alaska, forests are projected to burn multiple times before the canopy can grow back and soil layers rebuild. Walker and Mack hypothesize that these reburns are more likely to combust legacy carbon, and thus increase atmospheric greenhouse gas concentrations, accelerating global warming. Before visiting the Shovel Creek burn site, Walker compared maps of the two different fires and it looked as if a substantial area had burned twice relatively recently. However, the story on the ground was much different.

“When we got to this place where the reburn was supposed to exist, it did not exist,” Walker recounts. It was a gut-wrenching moment. They searched for at least an hour, carrying field equipment and navigating the burnt remnants of vegetation, looking for any possible sign they had found the seemingly mythical reburn. “We were all feeling two things—what if this doesn’t exist, and what if we can’t tell if it exists or not,” states Michelle, “We know something happened here 20 or 30 years ago, but what if it is no longer visible?” Finally, the team noticed a section where the standing dead trees looked different than the surrounding ones. Their stems and cones had been burnt off, their trunks more charred—signs that these trees had burnt twice. However, their elation soon turned to disappointment. The actual area of the reburn was a miniscule sliver, 200 times smaller than the maps depicted. At the end of the day, the field crew decided the area was too small to viably sample.

This summer, coronavirus drastically reduced the amount of fieldwork that ecologists, including Mack and crew, were able to conduct. However, their time spent in Alaska for necessary maintenance of long-term experiments allowed for the remaining spaces to be filled with new ideas and a rekindling of old ones. Towards the end of the field crew’s time in Alaska, Mack and her postdoctoral advisor, ecologist Terry Chapin, decided over dinner to sample one of Chapin’s experiments from 1988. It had not been revisited since 2002. Back then, it took the field crew 10 days just to relocate them, relying entirely on hand-drawn maps and memory.

Twenty years of technological advancements later, the crew’s search this summer was much faster. Using GPS coordinates as starting points and iPads with high-resolution satellite imagery, they were able to find and sample the sites in two days. Yet, Chapin’s maps were essential in pinpointing the exact locations of plots this summer. This seemed to be a common theme. After Walker’s difficulty in finding the twice-burned region in the Shovel Creek fire scar, she emphasized how future sampling would depend on detailed notes taken from previous field visits—or in other words, ground-truthing the digitized maps they had been relying on. “Field notes. They’re important—don’t throw them out.” As if echoing Walker’s caution earlier this season, Chapin’s maps from 1988, hand-drawn and scattered with field notes, had proven still useful for their work this summer—three generations of scientists later. It struck me: who will refer to Walker, Miller, Boyd, and other ecologists’ notes 20 years later? What research legacies will be carried on through these notes—and what new, exciting questions will they inspire? 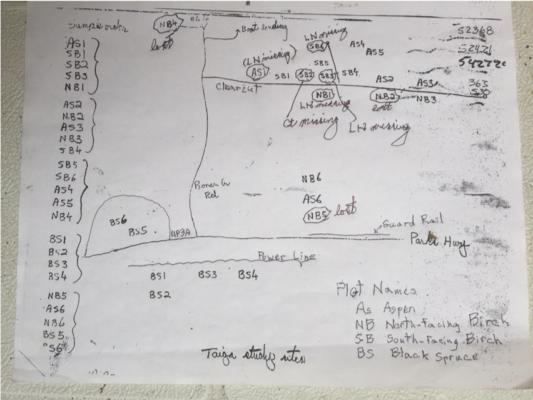 Terry Chapin’s hand drawn map of the 1988 field sites. Sampling these sites this year became much faster with the aid of GPS coordinates and digital maps.
Credit: Michelle Mack