Researchers in New Mexico can’t keep tabs on prairie dog populations. Scientists got booted from bunkhouses in an Oregon forest. And biologists are barred from tagging sharks and alligators in the Everglades National Park.

It’s all thanks to the government shutdown.

Federal agencies have locked scientists out of parks, refuges and forests since the government closed up shop last week. It’s devastating for researchers whose work is suddenly behind padlocked gates — and there’s no sign that they’ll get in anytime soon.

"We are not allowed to go to our research sites and do our work," said Scott Collins, a University of New Mexico biology professor who leads a long-term ecological research project in the Sevilleta National Wildlife Refuge south of Albuquerque, N.M. 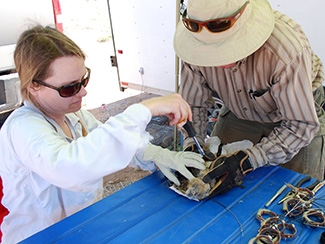 The 220,000-acre refuge — with two mountain ranges, more than 1,200 types of plants, hundreds of animal species and limited access to the public — is a biologist’s dream. Scientists have conducted research there since 1989, studying everything from prairie dogs and coyotes to how local ecosystems respond to climate change.

But when the government shut down last week amid a budget impasse in Washington, the Fish and Wildlife Service locked the gates to the refuge. "They have changed the combinations on the locks," Collins said.
"It’s very frustrating," he added. "We can’t get to any of our long-term monitoring stations."

Scientists can continue to get some information coming in from sensors in the field that relay data to computer systems. But they can’t do things like go out and fix sensors that need to be repaired or replaced, collect data about small mammal populations or measure biomass after a year of unusually high rainfall.

"This year is super important as a benchmark for that … because we compare next year to this year," Collins said. "We’re losing an opportunity to measure ecosystem responses."

Government officials even tried to shut down the field station nearby, which houses laboratories and growth chambers for plant and animal research, but Collins said he successfully protested, since the research program has an agreement with Fish and Wildlife to operate the station. "We still have access to that," he said.

Collins has started to lobby the local refuge staff to get access, he said, noting that the researchers have a good relationship with them. "This is sort of essential activity from our standpoint."

‘We had to lock all the doors

The New Mexico refuge isn’t the only place where the shutdown is taking a toll on researchers. Field crews staying at the H.J. Andrews Experimental Forest in the western Cascade mountains of Oregon lost their housing.

Scientists and students conducting a fish survey at the H.J. Andrews Experimental Forest in Oregon just before the government shutdown. Photo by Lina DiGregorio.

"The main headquarters and a small conference center, dormitories, which house all the field crews, are closed," said Michael Nelson, the lead principal investigator for a long-term research project at Oregon State University. The research center is well-known for its studies on the spotted owl and other bird populations.

The facilities at Andrews have the capacity to house about 80 researchers at any given time, but about 15 or 20 field technicians and graduate students would likely be staying there now if it weren’t for the shutdown, Nelson said. "They had to leave, we had to lock all the doors."

The lockout also means a loss of income for the research program, Nelson said, because people pay a fee to use the facilities and to use the bunkhouses and apartments.
For now, he said, scientists working at Andrews can still get into the forest to access their long-term monitoring stations — even if they can’t sleep on-site.

With the parks closed, we can’t do much

Mike Heithaus, a marine biology professor at Florida International University and part of an Everglades long-term research project, has had his work in the Everglades National Park put on hold.

"With the parks closed, we can’t do much," said Heithaus, who’s researching the importance of big predators like bull sharks in coastal estuaries. At issue in his work: how predators keep prey populations in check and move nutrients into the ecosystems.
If the park weren’t shut down, "we’d be going in and doing tagging and sampling of sharks and alligators," he said. But the park’s entrances have been closed to boat access — even for scientists.

"We got emails basically saying we can’t go into the park," Heithaus said. "We’ve had to cancel several of our shark-related trips already."

He and his colleagues spend a lot of time in and around the Shark River Slough, the historic conduit for water into the park. Those people "would much rather be out in the field collecting data than stuck back at home not doing it."