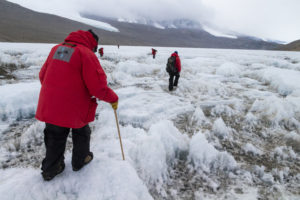 The ‘Wormherders’ make their way across the permanent ice cover over Lake Bonney to their research site.
Credit: Natasha Griffin (CC BY 4.0)

The lake ice crunches beneath my boots with each tentative step I take. Realistically, I know there’s not much danger here—I’m standing atop Lake Bonney, one of the permanently frozen lakes of Antarctica’s McMurdo Dry Valleys. The ice underfoot is at least a few meters thick, creating a sturdy barrier between me and the deep, cold, salty waters below.

Still, my teammates and I are careful as we pick our way across the ice, skirting around melting patches that have turned brown with dust and moving slowly to avoid twisting an ankle on the rough terrain. Dr. Jeb Barrett roams ahead of us to find the best route, and Dr. Byron Adams walks patiently behind to make sure nobody’s fallen over. As the team leaders, they’ll direct our scientific objective today: to traverse the lake, collect samples from our experiment on the opposite shore, and then shepherd our bags of heavy Antarctic soil back across the ice to our field camp.

Our little group crossing the lake ice is informally known as the Wormherders, a name affectionately given to us by the helicopter pilots who fly scientists around the Dry Valleys. We study the soils (and their wormy inhabitants) here in the largest region of continental Antarctica that isn’t covered by the Antarctic ice sheet. It’s a wind-battered, frigid desert landscape. Glaciers spill over the mountains bordering the valleys, feeding small streams that flow only in the summertime and lakes that remain frozen year-round. It never rains, leaving the soils here coarse, dry, and seemingly absent of life. But the Wormherders know otherwise: living communities of tiny animals—nematode worms, tardigrades, rotifers—persist in the soils of the Dry Valleys. These miniscule creatures make up the top of the food chain here, and it’s our job to figure out what they’re up to every year.

Alongside other McMurdo Dry Valleys LTER scientists, the Wormherders have been visiting this strange ecosystem every austral summer since 1993. At the start of each field season, we split into teams and head out to measure and maintain our experiments on glaciers, streams, lakes, and soils. Without plants and large animals here to complicate things, scientists are able to use this relatively simple habitat to ask fundamental questions about ecosystem function, diversity, and resilience to change.

In the Dry Valleys, “Mother Nature has already done this amazing experiment that makes it a unique place,” says Dr. Adams. “All I have to do is show up and collect the data.”

In Antarctica, showing up and collecting the data is usually easier said than done. To get here, LTER researchers fly over the Pacific Ocean to New Zealand, then hop on a U.S. Air Force plane across the Southern Ocean to McMurdo Station, and are finally shuttled via helicopter over to the Dry Valleys. After arriving, scientists often have to wait out the temperamental Antarctic weather before they can venture out to do their work. But after more than a quarter of a century of dedicated research expeditions, the McMurdo LTER team has made some surprising discoveries about the connections between living organisms and their Dry Valleys environment—and they’re gaining insight into how these connections might change in the future.

A journey through time, and SLIME 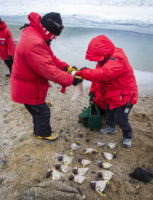 When we arrive on the northern shore of Lake Bonney, we Wormherders assemble our high-tech scientific equipment: plastic bags, bottles, scoops, and spoons. To avoid disturbing the bare soil, we hop between larger rocks and sink into precarious crouches to collect our samples. First, we use a spoon to skim off the top few millimeters of soil and deposit them into a tinted plastic bottle. Then we take a hefty scoop of the coarse, sandy soil beneath and deposit it in a plastic bag. In a few days, a helicopter will carry us and our samples back from our camp in the Dry Valleys to the relative civilization of McMurdo Station, where we’ll use microscopes to examine the nematodes and other tiny animals in these soils.

But first we need to finish our work here at the Soil-Lake Inundation Moat Experiment (SLIME) site. We’re here because not too long ago, the soggy shore where we stand was dry soil. Over the last eighteen years, changing atmospheric chemistry has increased the amount of solar energy reaching the Dry Valleys, which has helped to accelerate melting on the surrounding glaciers. steady sunny weather Streams have carried the extra glacial meltwater down to the closed-basin lakes, causing lake levels to rise and begin flooding the surrounding soils. Unlike other polar ecosystems, the Dry Valleys have so far been slow to feel the warming effects of climate change—but the rapidly rising lakes stand out as a signal of an ongoing transformation.

To understand how rising lakes are affecting the surrounding soil animals and chemistry, we’re collecting samples at different distances from the lake edge. A few weeks before we arrived, another team melted a hole through the thick lake ice and dived in Lake Bonney’s chilly waters to collect sediment from the lake bottom and the ice-free “moat” surrounding the lake’s edge, one of the most biologically active habitats in the Dry Valleys. Based on their long-term records of streamflow and glacial melt, LTER researchers can calculate exactly how long each location has been underwater. This makes the SLIME project a sort of journey in time, helping us to predict how the dry soil animals we’re collecting today will respond to future inundation.

As Dr. Adams says, “If you really want to understand how an ecosystem responds to long-term changes, you need to know how it responded in the past.”

As soils are submerged beneath expanding lakes, their nutrient and energy cycles are fundamentally changed. The water helps to mobilize nutrients in the soil, creating a cascading effect from nutrients to algae to the types of animals that can survive there. These changes become clear when we peer through our microscopes back in our laboratory at McMurdo Station: in our dry soil samples, we find fat and graceful Scottnema nematodes, the most abundant animal species in continental Antarctica. In contrast, the lake sediments abound with scrunchy rotifers, wriggly Plectus nematodes, and eight-legged bear-shaped tardigrades. The Scottnema don’t know it yet, but someday the lake waters will come for them too, and they’ll be replaced.

A more connected future for the Dry Valleys

As we make our way back across Lake Bonney to our field camp, I think about the other changes coming for the Dry Valleys. It’s not just the lakes and their surrounding soils. Other habitats across the ecosystem are shifting too, sometimes in subtle ways. Frozen permafrost soils are thawing and collapsing into streams, stronger winds are blowing more dust around the valleys, and larger glacial meltwater streams are reaching new soils. With all of these changes, more nutrients and organisms may have the chance to move around the valleys, creating a more connected ecosystem. Ultimately, this connectivity might end up mixing the biological communities of the Dry Valleys together, creating less diverse communities that could be less resilient to future changes.

For now, though, I’m mostly concerned about drying out my boot. At the very end of our journey home, I managed to put my foot through a thin spot of ice near the shallow lake moat. It’s time to find a new pair of socks, make some hot chocolate, and rest inside my tent. The Dry Valleys will still be there tomorrow. 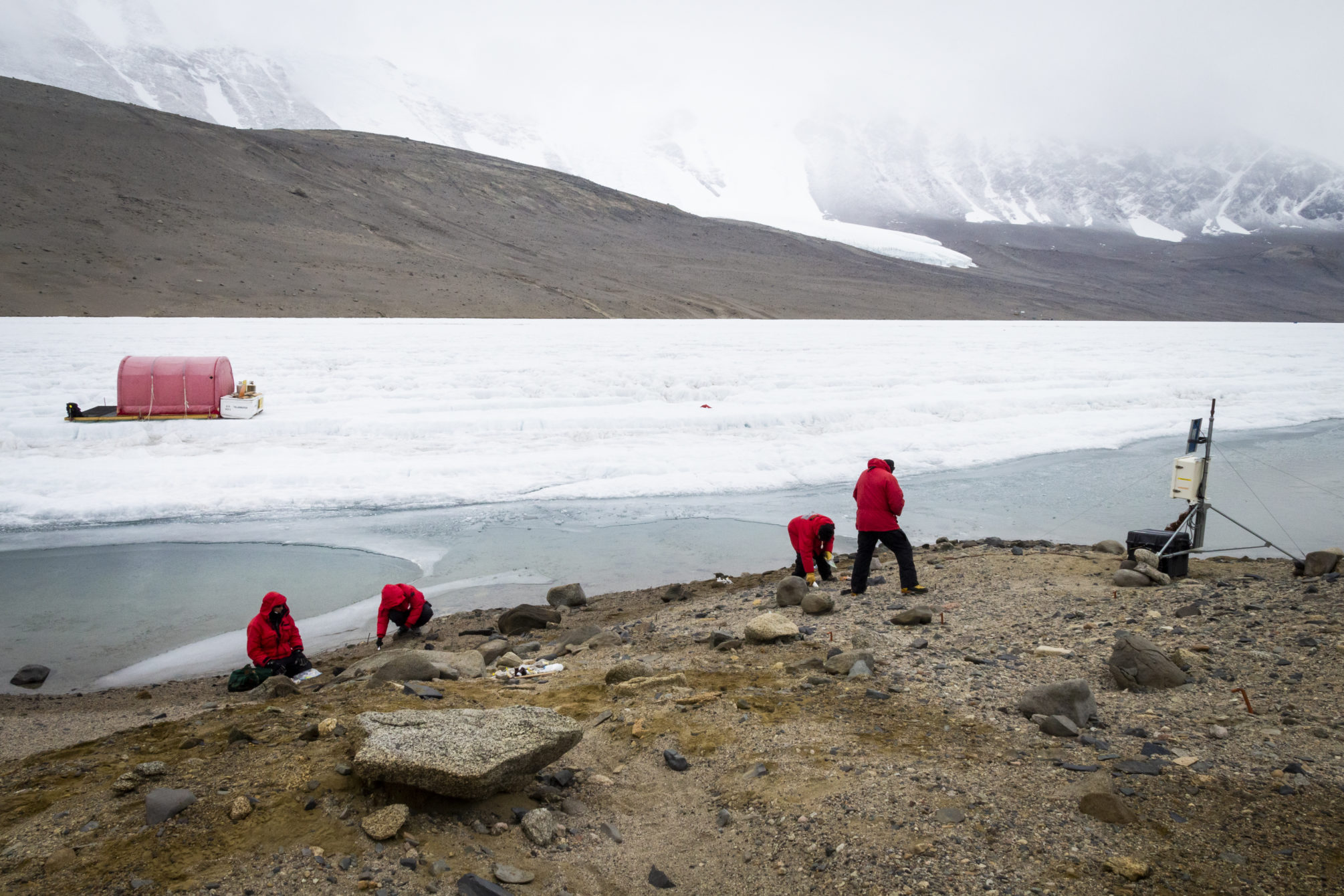 The Wormherders take soil samples from the SLIME experiment site on the northern shore of Lake Bonney. On their left is the dive hut used by other LTER scientists who dove under the ice to collect lake sediment samples. On their right is a sensor station that records information from buried soil moisture sensors on the lakeshore.
Credit: Natasha Griffin (CC BY 4.0)

Natasha Griffin is a graduate student at Oregon State University, where she studies microbes and biogeochemistry on the Arctic Alaskan coast as part of the Beaufort Lagoon Ecosystems LTER. As an undergraduate, she spent two field seasons in Antarctica as a Wormherder with the McMurdo Dry Valleys LTER. Natasha loves talking about science, eating spicy chips during fieldwork, and learning more about microbes and the ways they rule the world.