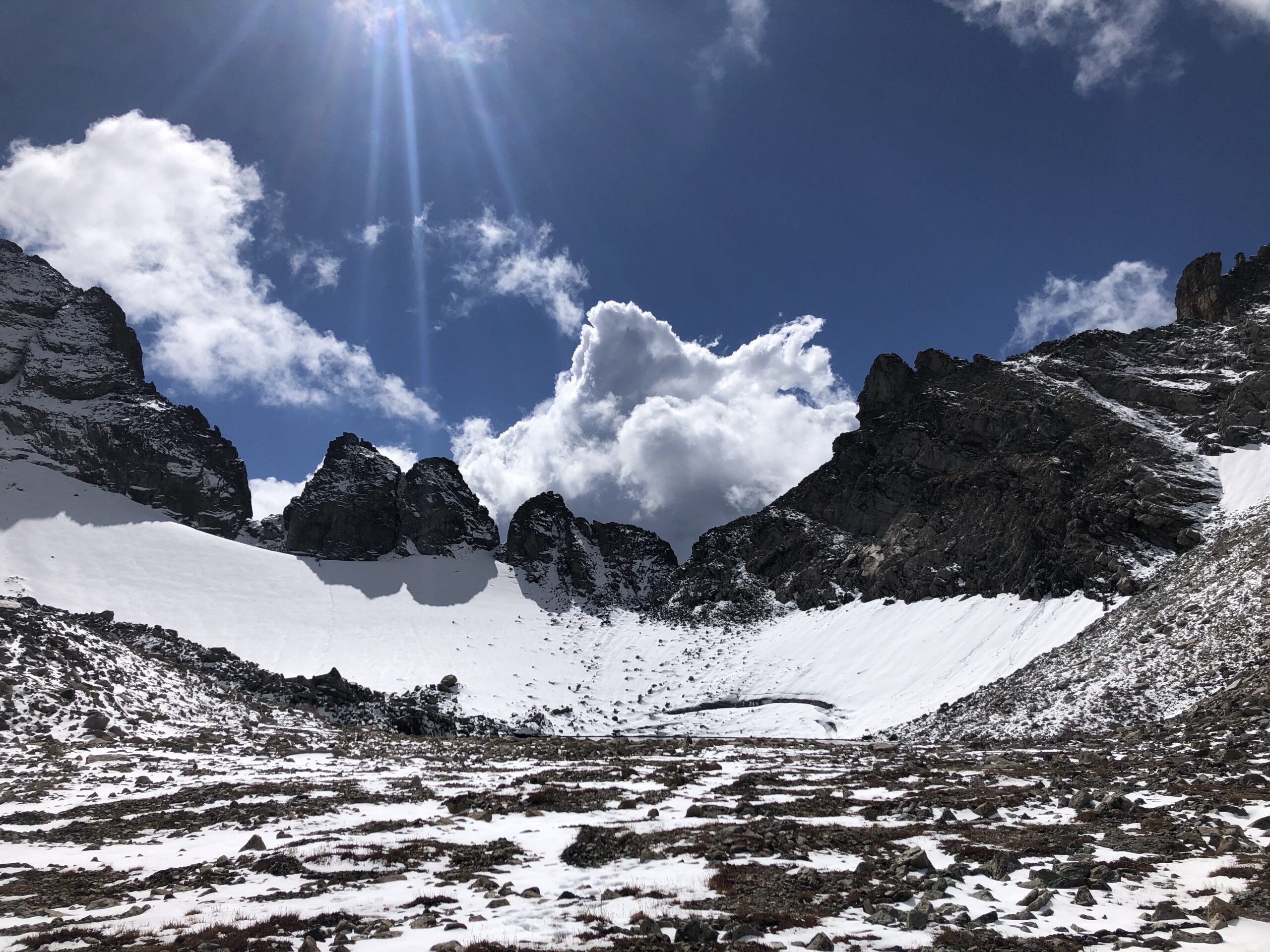 Arikaree Glacier is located atop the NWT LTER Green Lakes Valley. Since the early 2000’s the glacier has become noticeably reduced in size. It’s predicted that the glacier will have vanished within the next 20 years resulting in significant changes for the surrounding ecosystem.
Credit: S. Taylor, CC BY-SA 4.0.

Melting glaciers are now ubiquitous across the globe, and can have serious downstream effects on alpine ecosystems and surrounding watersheds. When metals are released from the ice, and newly exposed bedrock is subject to weathering, the newly released material alters alpine habitats downstream of melting glaciers.

Understanding how glaciers shape ecosystem processes has been a major research focus at the Niwot Ridge (NWT) LTER, where climate measurements have been collected since the 1950’s. But a new analysis based on 36 years of data reveals that the mechanisms shaping NWT streams are more complicated than previously predicted based on glacial thaw alone—a result that runs counter to older findings from the same research station.

Prof. Iggy Litaor, a researcher at Tel-Hai College in Israel, reanalyzed long-term lake chemistry data from the NWT LTER to test a previous hypothesis: that the rapidly melting Arikaree glacier has predictable effects downstream. In particular, he wanted to see if glacial runoff into lakes and streams with metals has altered their chemistries. If glacial melt alone is what is affecting stream chemistries, then intensifying rock glacial melt could have significant effects on the ecosystem’s flora and fauna and consequences for the Boulder County Watershed, a key drinking water source. While his results, published in a new paper in Science of the Total Environment, suggest that NWT stream chemistries are indeed changing over time, this change is not consistent with heavy metal upticks from rock glacial runoff.

What’s in a stream chemistry?

The site of Dr. Litaor’s study is a rock glacier, where underlying glacial ice is covered by rock and gravel. When the glacier melts, the melt mobilizes mostly negatively charged anions from the oxidation of pyrite. Dr. Litaor therefore designed a simple scheme to test if rock glacial melt is the predominant driver of downstream water chemistry. If rock glacial melt is the only mechanism that is altering Green Lakes Valley (GLV) stream chemistries, then downstream pH values should decrease over time from the inflow of negative ions. Niwot has stream chemistry data extending back to 1984, which made his analysis possible.

Contrary to previous findings, when Dr. Litaor looked at the long-term trends, he found that median pH values across all sampling sites have actually increased significantly since 1984. Furthermore, this trend has had some twists and turns along the way. For example, median pH values actually decreased between 1984 and 1990.

His findings suggest that GLV stream chemistries are influenced by multiple factors. “What is happening in these streams and lakes with ongoing climate warming is more complex and multifaceted than previously predicted,” says Dr. Litaor.

Dr. Litaor dug deeper into the data, which also included long-term measurements of several different anions and cations. He found that concentrations of the pH-lowering anions nitrate and sulfate showed an overall significant decrease across the entire 36-year time series. In contrast, there has been an overall increase in calcium cations, which raise pH values. These trends explain the long-term increase in pH.

But the results are complicated. Anions increased in the late 80’s and early 90’s, despite their overall significant decrease across the entire 36-year time series. Calcium cations actually decreased at some sampling sites between 1984 and 1990. These observations are in contrast to the effects researchers predict from a rapidly melting rock glacier. And the Arikaree glacier is melting fast: a 2015 study by Leopold et al. suggested that drought and high temperatures could cause the glacier to completely melt within two decades. 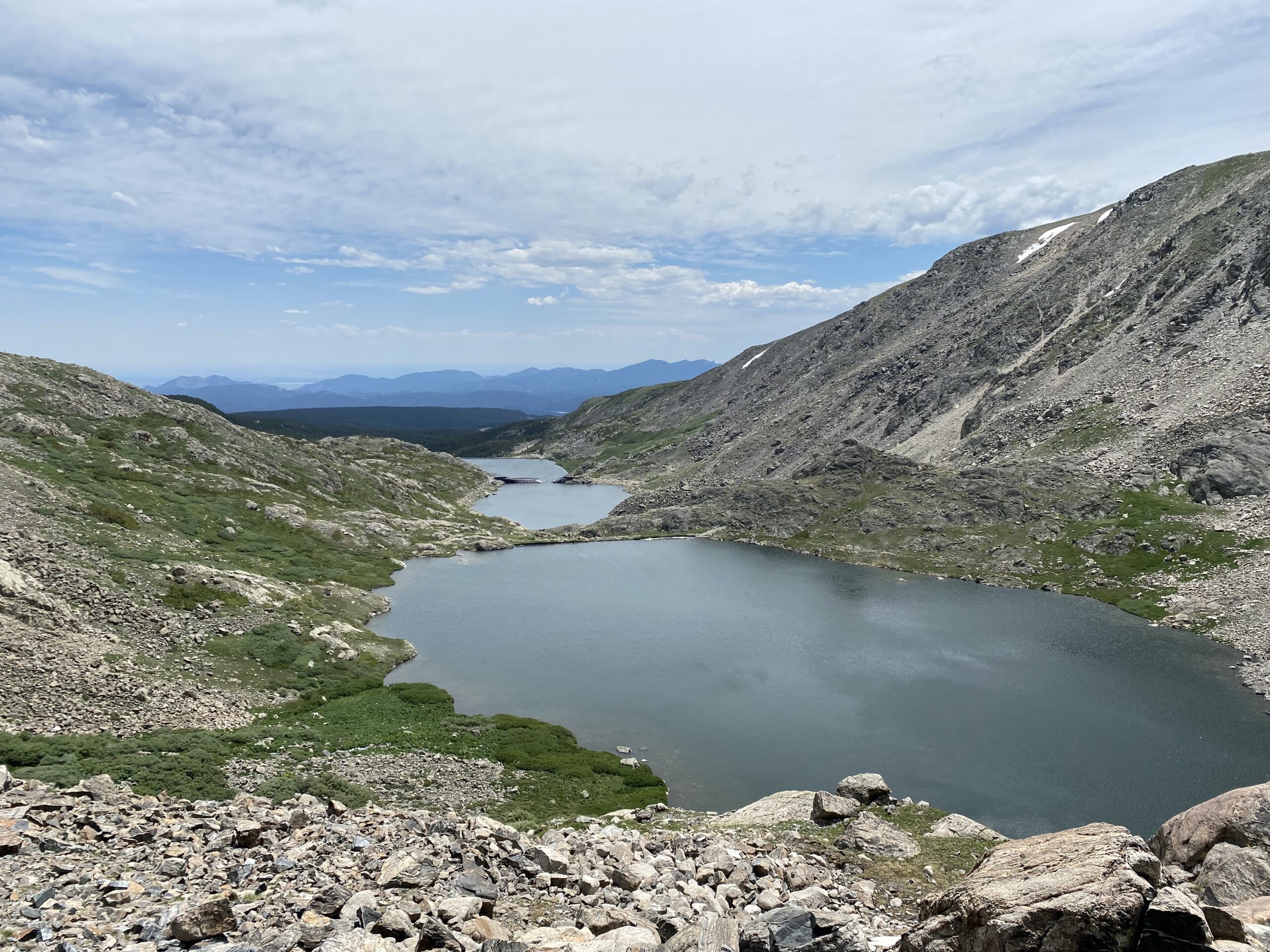 The Green Lakes Valley has been studied at NWT LTER since the 1980’s. Long-term data suggests that changes in lake and stream chemistries are influenced by a combination of glacial melt and other exogenous factors
Credit: A. Theodosopoulos, CC BY-SA 4.0

While glacial melt is inevitably influencing GLV stream chemistries, it alone cannot explain the observed trends. The question now is, what is causing the pH of these alpine waterways to rise? In his recent study, Dr. Litaor suggests that there might be an influence from eolian dust. These are particulates that can be transported across long distances through the earth’s atmosphere. One potential contributor of eolian dust at GLV is fire, which has been on the rise in drought-laden Western North America. To address this question Dr. Litaor plans to sample soils surrounding the GLV to look at their associated chemistries and composition. Additionally, long-term effects on GLV streams from historic disturbances, such as mining, are also worth considering.

Towards a better understanding of alpine ecosystems

As alpine environments continue to warm, the long-term data collected at NWT LTER will be critical for understanding how different anthropogenic factors and climatic regimes drive downstream effects within these complex ecosystems. Alpine climate data from NWT LTER is the longest recorded in North America. Countless scientists whose expertise span a diversity of disciplines have harnessed this data to improve our understanding of alpine ecosystems with the shared goal of their preservation. Litaor refers to alpine ecosystems as “sentinels of climate change,” and his ongoing work, including this paper, aims to understand the future of these systems.