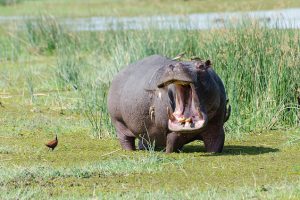 Wetlands exist on every continent save Antarctica and manifest as a variety of habitats, from salt marshes to mangrove forests. They provide important ecosystem services, such as water purification and flood protection—often tied to their high productivity and diversity.

Wetlands are especially vulnerable to changing water withdrawals and climate because their unique ecology relies on receiving pulses of freshwater. A team of researchers from the Florida Coastal Everglades LTER explored how hydrologic disturbance is impacting algal species diversity in two globally significant marshes.

In the Florida Everglades, water flow is strictly managed and regulations have begun to reduce withdrawals from the watersheds that feed the marsh. In Botswana’s Okavango Delta, flood amplitude is much higher and hydropower dams are being developed upstream. Researchers compared the effect of two factors that are strongly influenced by water regimes—flooding frequency and phosphorous availability—on algal species richness. The study provides baseline measurements that will aid in understanding the impacts of watershed changes in the coming years.