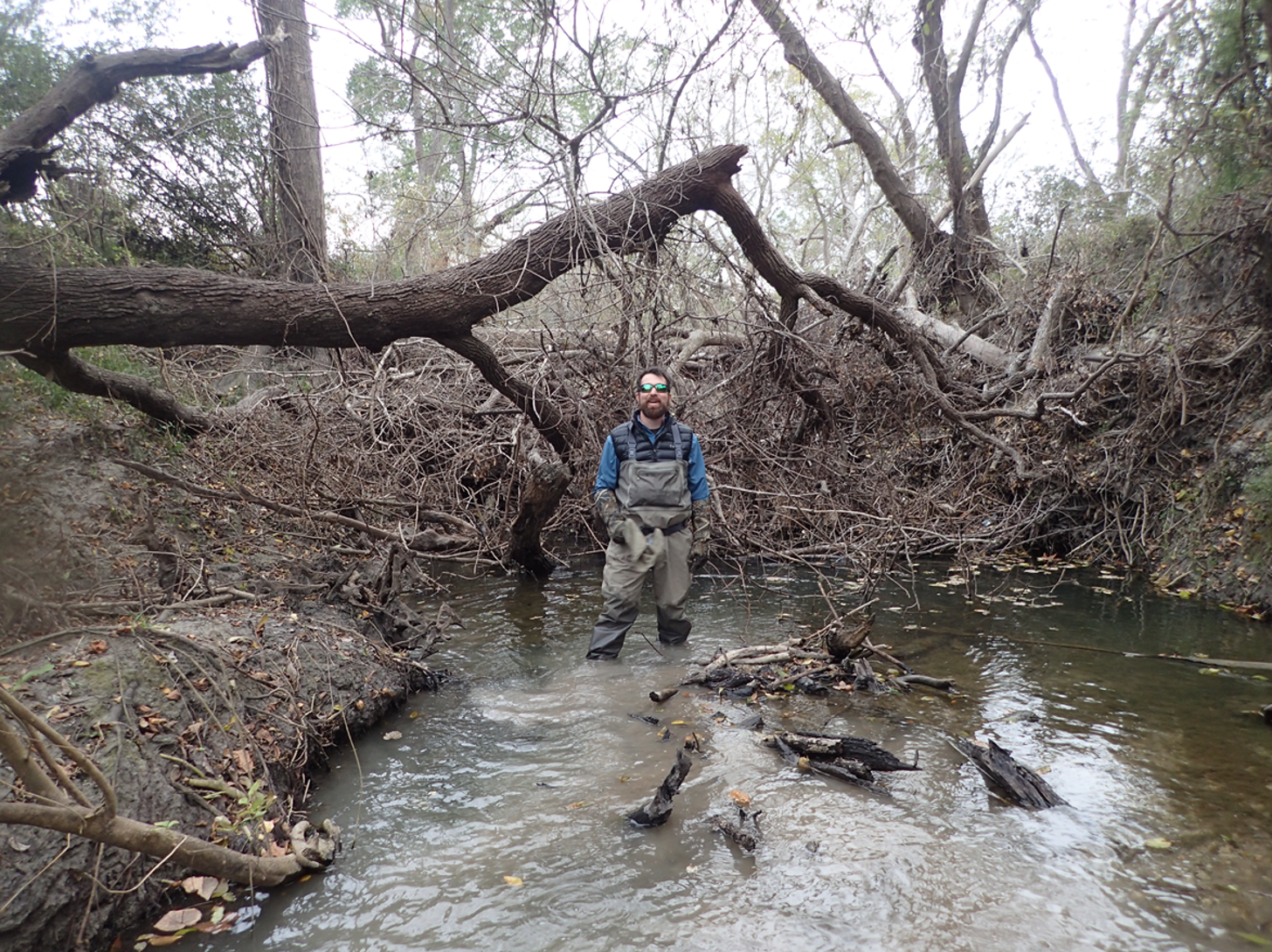 Hurricane research is necessarily opportunistic: it’s impossible to predict where storms will hit land until a few days in advance. As such, hurricane ecology research is primarily a patchwork of studies as unique as each hurricane’s path. But the patchwork approach has serious limitations. With one-off studies lacking cohesive sampling methods or crucial pre-hurricane data, studying the general effects of hurricanes across ecosystems and storms is difficult.

But occasionally, long-term research projects—LTER and NEON sites, water quality monitoring projects, individual researcher’s study sites, forest service sites, etc.—lie in a hurricane’s path. A new publication, “A general pattern of trade-offs between ecosystem resistance and resilience to tropical cyclones,” leverages data from these sites to study the broad effects of hurricanes on different ecological systems. Their results, published in Science Advances, show that ecosystems resist devastation from hurricanes by choosing either of two strategies: some ecosystems show high resistance, and can persist through high winds and heavy rainfall; others show high resilience, quick to recover from total devastation.

Resistance and resilience, two sides of the same coin?

After a years-long process, Dr. Christopher Patrick, lead author of the study, and his team ended up with just over four-thousand time series that captured ecosystem dynamics from twenty-six storms at one-hundred and eighteen research sites. Armed with loads of data, they searched the time series of ecological responses to hurricanes in the US for signs of resistance and resilience. They initially wanted to see which hurricane impacted ecosystems tended to be more resilient or resistant. But their results were far more interesting.

Dr. Patrick’s group, a product of the National Science Foundation funded Hurricane Ecosystem Response Synthesis Network (HERS), is the first to show empirical evidence of a resistance-resilience tradeoff in such a big study across so many different ecosystems. And their result was hard to ignore. “We just wanted to show what we had,” Dr. Patrick says. “And the negative covariance pattern just jumped out.”

Finding common ground in a flood of data

Initially, the data the group collected were scattered: they came from a variety of ecosystems with drastically different characteristics, each hurricane varied in intensity and duration, and the time series themselves ranged from biogeochemical dynamics to population surveys.

The team needed a way to compare vastly diverse datasets. The first key, relays Dr. John Kominoski, an author on the study and Co-PI for the project, was to develop metrics that compared characteristics common to time series, rather than the actual measurements. “That’s critically important for this kind of cross system comparison and synthesis,” Dr. Patrick says. “You need a common language to make fair comparisons. If you can’t come up with that, you’re really stuck.”

The next key was to actually define resistance and resilience in ecological context. Here, Dr. Patrick explains, was where they had a huge breakthrough.

Both resistance and resilience, he describes, are intrinsic ecosystem properties. “We can frame them through these observations and get at them, but we can’t measure them.” What their time series data actually show is the ecosystem response to hurricane stress. “That initial response is a product of the intrinsic resistance and also the magnitude of the stress,” in this case the severity of the hurricane, he continues.  “And the recovery rate is the product of the intrinsic resilience and how much the ecosystem initially changed following disturbance.” To truly compare resilience and resistance, the team scaled each time series to the severity of the hurricane and severity of the response. 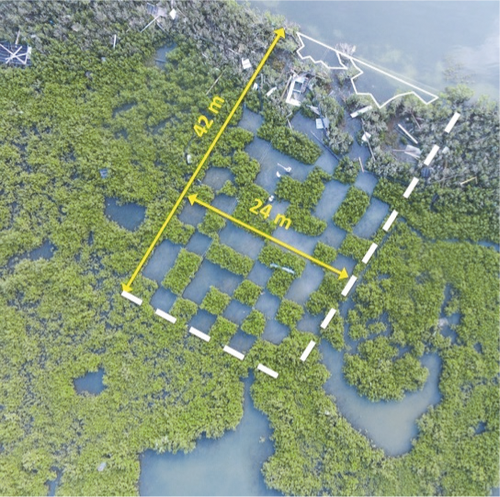 The white and yellow borders show boundaries of the experimental marsh-mangrove wetlands in Port Aransas, Texas after Hurricane Harvey passed through the area.
Credit: Rachael Glazner

Relationships hold up, no matter how you break them down

Hurricanes stress ecosystems through two major effects: high winds and intense rainfall. Ecosystems might respond differently to either, so the team separated resistance and resilience to rainfall from resistance and resilience from wind speed. Then, they broke their data down further by ecosystem (freshwater, saline, terrestrial, or wetland) and variable type (biogeochemistry, hydrography, mobile fauna, sedentary fauna, and vascular plants). “There’s a little bit of ecosystem variability,” Dr. Kominoski says. “But, remarkably, across the data, if you’re resistant to wind or rainfall, you’re not really resilient to it.”

But what does it all mean?

Such a strong resistance-resilience tradeoff relationship really opens all sorts of interesting ecological questions, Drs. Patrick and Kominoski explain. For one, their research does little to explain how ecological traits lead to either resistance or resilience. Individual species traits, such as generation time or seed dispersal ability, might explain some of the variation. But so might physical ecosystem parameters, such as topography or the size of a coastal wetland. Or, legacies of past storms might alter an ecosystem’s response over time, and immediate physical conditions like a pressing heatwave could further complicate the response. When all these factors concur, determining why an ecosystem might be either resistant or resilient becomes really difficult.

And, while understanding whether an ecosystem is resistant or resilient might eventually determine how susceptible an ecosystem is to a hurricane or how post storm restoration might proceed, connecting the dots in the real world is tough. “[This study] begets the question of ‘how can you ensure endurance in systems if they’re either [resistant] or [resilient]?,” asks Dr. Kominoski. “I think it’s led to more questions than it’s answered.”

Regardless, this work demonstrates that cross-ecosystem, large-scale hurricane research is both possible and fruitful. Drs. Patrick and Kominoski stress that the biggest implication this work can have is to shift how hurricane research happens in the future. “If we really want to understand how these systems respond, we need to move beyond just cataloging what happens to ecosystems to developing these theoretical frameworks and starting to test them with manipulative experiments,” Dr. Patrick says.

With an experiment running in the right location, a hurricane will return to a previously hit zone—it just might be ten or fifteen years until the next storm. Long term observational studies position researchers to capitalize on those repeat strikes. A few manipulative experiments, such as those at Luquillo and Harvard Forest LTERs, simulate hurricane conditions. And coordinated research networks, such as HERS, bring researchers together to overcome the challenges of hurricane research.