New research from a long-term experiment at the Konza Prairie LTER shows that past climate conditions influence how ecosystems respond to current water availability. 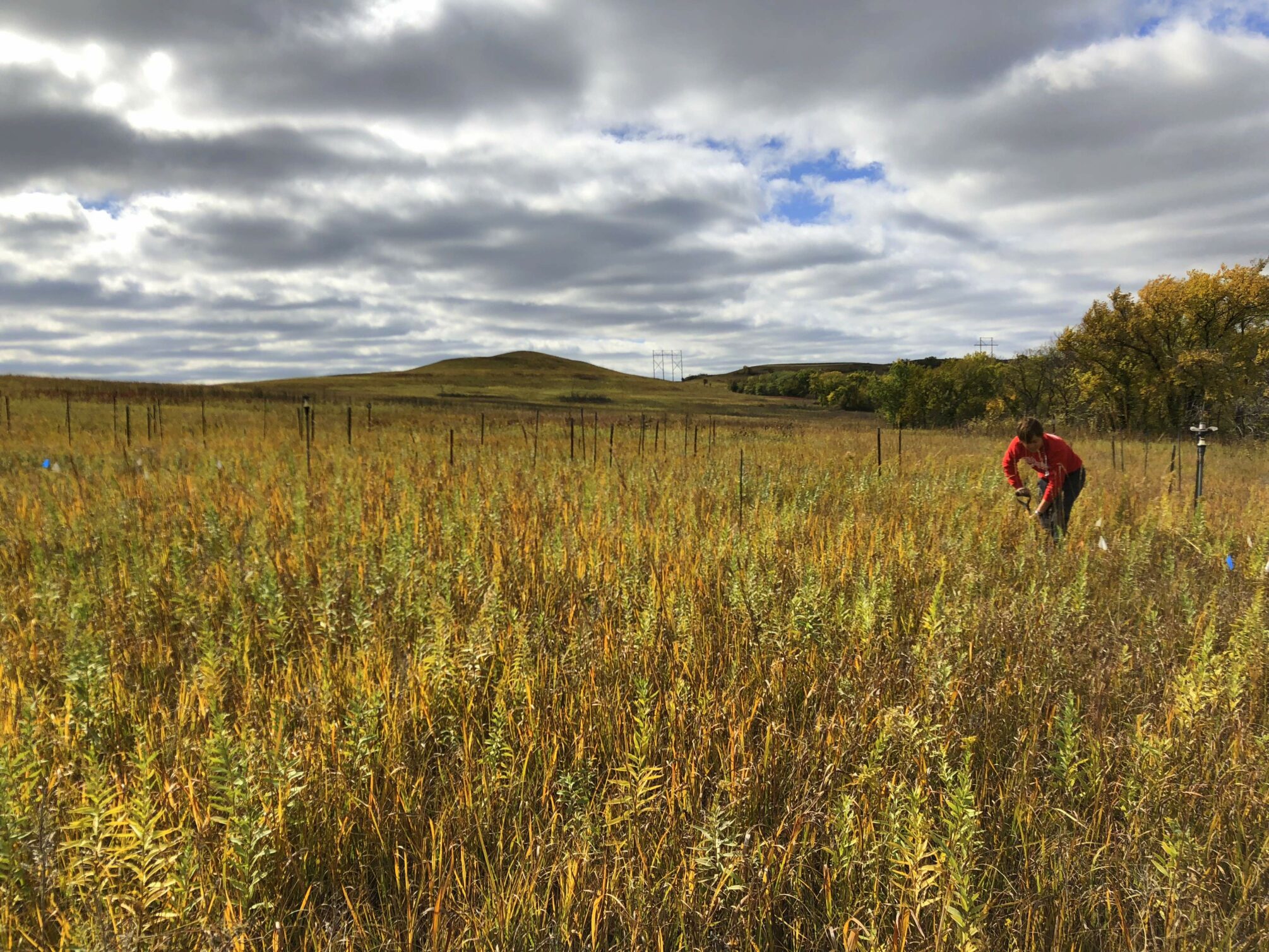 The irrigation transect experiment at the Konza Prairie LTER runs along the entire reserve, from the lowlands to the highlands.
Credit: Jill Haukos, CC BY-SA 4.0

A hallmark of environmental science research is understanding how ecosystems respond to global change. Much of this research focuses on short term ecosystem responses, such as how an ecosystem responds to a sudden onset of drought. But all sorts of previous conditions can modify that response.  In the same way that a formative childhood experience might change the way an adult responds to stress, legacy effects can change the direction or magnitude of ecosystem response to disturbance.

A new study from the Konza Prairie LTER modified a twenty-five year long irrigation experiment to show that historical irrigation patterns determined the sensitivity of carbon cycling to drought. The results suggest that long term legacies play a significant role in how an ecosystem responds to short term stress. 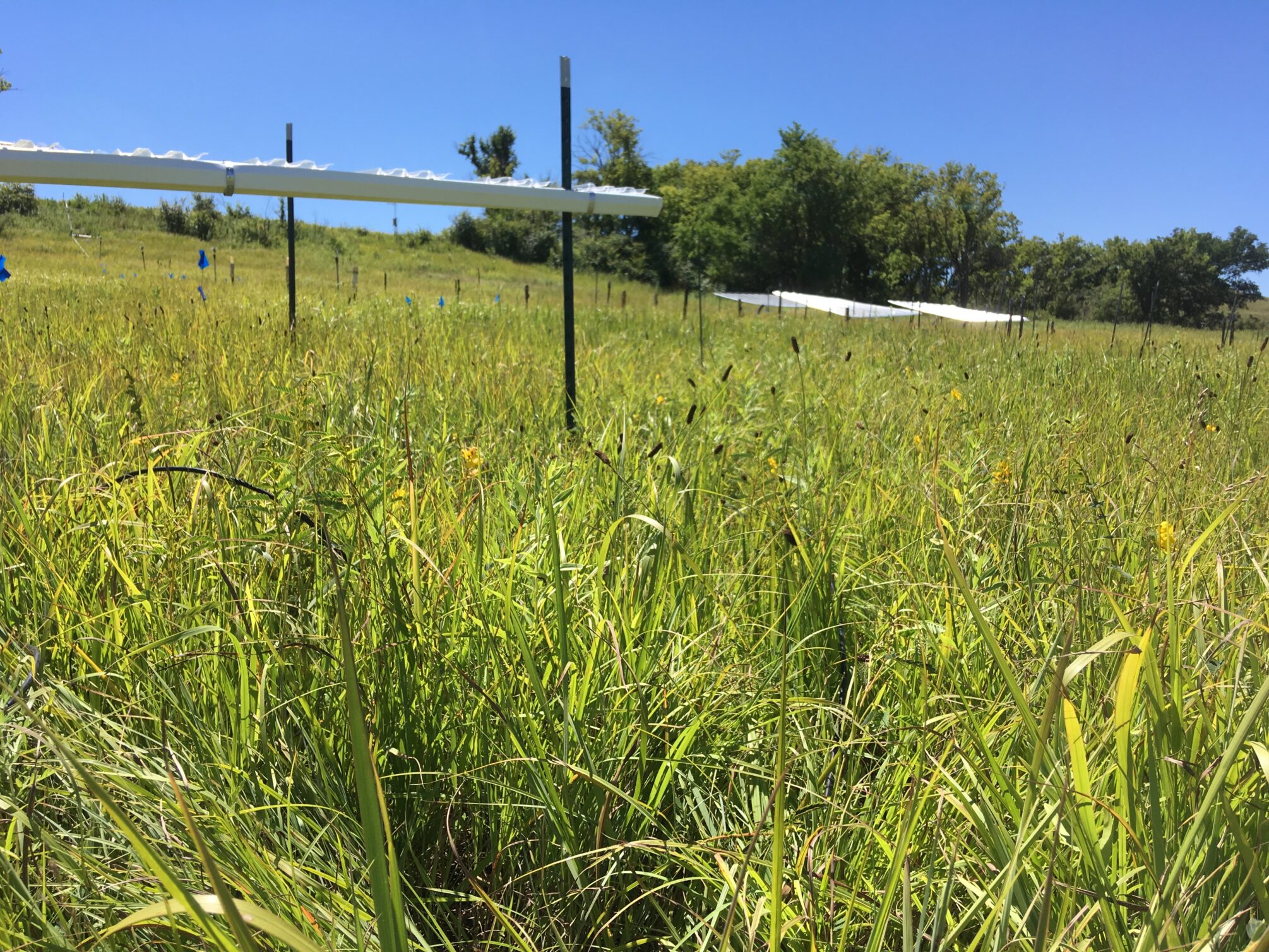 The search for legacy effects at the Konza Prairie LTER began with a long term experiment. Researchers at Konza Prairie started to irrigate a long strip of prairie in the 1990’s. Initially, they wanted to study how avoiding drought might change the ecosystem, from plant community composition to soil nutrient availability.

In 2017, after twenty-five years of consistent irrigation, Konza researchers had what they needed from the initial experiment. So they shifted course, and reversed treatments for several experimental plots. Historically irrigated sites were suddenly thrown into a simulated drought. Researchers also induced drought at several control sites, which saw natural precipitation for the initial twenty-five year long experiment. The transition allowed researchers to look for legacy effects: persistent effects of long term environmental conditions, in this case ample water, that affect how the ecosystem functions in the face of new environmental stress.

A carbon source or sink? The prairie can be both

Over the course of the following three years researchers measured several variables that they thought might reveal legacy effects. Many of these revolved around carbon. “Tallgrass prairie tends to fluctuate between being a source and a sink for carbon depending on climate,” Caitlin Broderick, lead author of the study and former grad student at Konza, says. As a result, legacies left on the prairie carbon cycle are particularly interesting in the context of climate change.

The carbon story also manages to summarize a broad range of ecosystem changes. For example, increased carbon cycling through the ecosystem might result from plant community shifts towards high-producing species or signal increased nutrient availability, brought on by microbial communities. Understanding the carbon story provides clues as to where else researchers might find legacy effects.

The team found the most significant evidence of legacy effects in aboveground net primary production (ANPP), indicative of an ecosystem’s capacity to store carbon via photosynthesis. ANPP remained significantly higher in historically irrigated plots than controls when faced with drought conditions. Remarkably, historically irrigated plots maintained higher ANPP for all three years of the study, suggesting that some legacy effects persist long after acute environmental change. And, the legacy effect was stronger in the second and third years after induced drought than the first.

Broderick notes that the ANPP finding is particularly notable in the context of predicting future ecosystem responses to global change. Other experiments, including one she’s conducting right now, often impose environmental stress over short timeframes. But “the short-term experiment we’re doing might actually underestimate the true responses we see with longer term climate change,” Broderick notes, because legacy effects can buffer the magnitude of the ecosystem response in the short term. 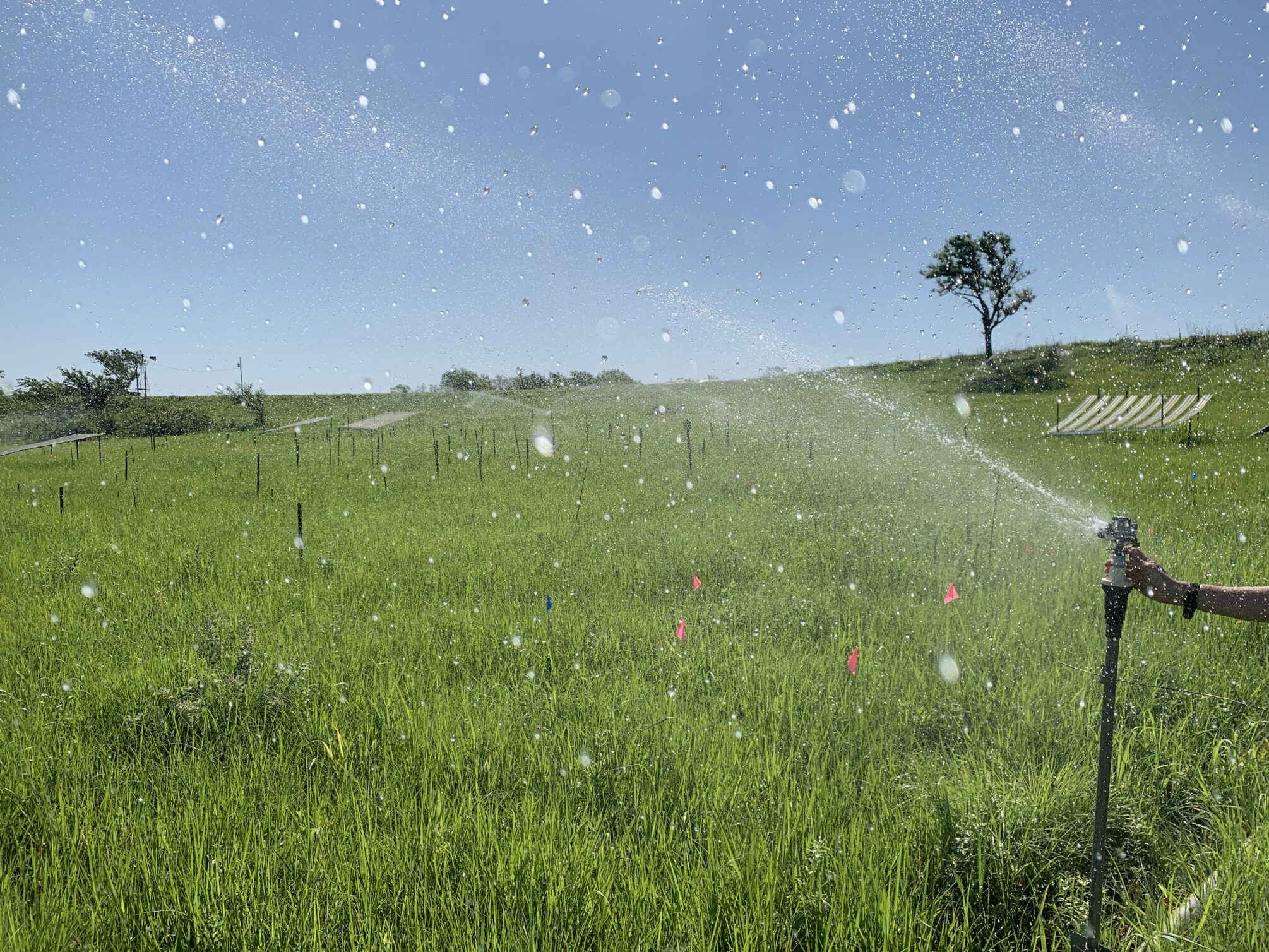 The irrigation transect experiment used a sprinkler system to water the prairie for twenty-five years. Researchers manipulated the experiment to search for legacy effects on the grassland.
Credit: Caitlin Broderick, CC BY-SA 4.0.

Broderick also found legacy effects of irrigation on soil respiration. Previously irrigated plots maintained higher soil respiration than the controls for two years after the induced drought. “That’s pretty interesting because we don’t really think of these as driven by longer term conditions,” says Broderick. Not only did her team find legacy effects of irrigation years after the induced drought, but the direction of the effects were opposite to what Broderick and her team hypothesized. This suggests that the drivers of legacy effects for soil respiration are different from the drivers of the short term response.

Last, the group also found evidence that historical irrigation increased extractable organic carbon (EOC) compared to control sites. The increase in EOC may hint at future increases in total carbon storage under wetter conditions. Increased EOC also supports the increased ANPP and microbial respiration findings. “If a site used to be irrigated, everything is a bit more active,” Broderick notes, adding that the increased activity can support faster ecosystem processes.

Elevation influences the severity of legacies

Konza Prairie runs along a mild, but significant, slope, where the low end sits about 100 meters below the high end. This elevation gradient influenced how sensitive the prairie was to irrigation legacies: the lowlands showed strong legacy effects in all measures, while the highlands showed weaker responses. While the true causes of the discrepancy are unknown, one cause may be that the deep lowland soils hold water longer than the shallow highland soils, says Broderick. Or, the plant community differences between the two zones could hold the answer. “The forbs in the lowlands were particularly responsive to these legacy effects”, Broderick says. “They produce more when it’s long-term irrigated, then stay producing more even in drought,” she continues, though more work still needs to be done to parse the drivers from the experiment.

Carbon is only part of the legacy story

Broderick’s team explored several potential drivers of the legacy effects they found, mainly related to carbon dynamics. But they were only able to paint a partial picture. For example, community composition changes explained some, but not all, of the sustained ANPP they detected. This doesn’t surprise Broderick. “Our prairies tend to be limited by both water and nitrogen,” she explains, adding that there are drivers the group has yet to explore. They plan on diving deeper into nitrogen and other legacies in the future.

Still, the findings do highlight how long-term legacies can influence short term experiments. “I’m excited to see how universal these findings are,” Broderick says. She adds that there are many long term drought experiments across the country, in LTER sites and beyond, that are conducive to similar work. “If legacy effects are common, “a two year drought experiment might be underestimating the responses we see,” Broderick concludes. The LTER, defined by long-term experiments yet free to alter their course after twenty-five years, is a perfect place to continue to search for legacy effects.