As ecosystems respond to human activity, what organisms will emerge as new trailblazers, shaping the diversity and resilience of these changing environments? And how can land managers identify these species early on to better prepare for the future?

Forests of southern Appalachia have a history fraught with human activity. Hardy and towering, American chestnut and eastern hemlock once dominated riparian forests of the region as foundation species, providing essential stability and resources to other organisms. However, a shift from long-maintained Native land management practices towards western practices of logging and fire suppression combined with the introduction of invasive pathogens and pests dramatically reduced the influence of both trees.

Coweeta LTER researcher Maura Dudley and her collaborators at University of Georgia and the U.S. Geological Survey argue that Rhododendron maximum, a tall abundant shrub in forest understories, could be the newest plant to emerge as a foundation species in these ecosystems. Unlike its predecessors, this one may stick around for longer in these changing forests.

Foundation species are widespread, abundant organisms that have lasting effects on many aspects of an ecosystem—from large-scale processes like carbon cycling to the microscopic communities living within the soil. In a review of the long term research on southern Appalachian riparian forests, Dudley and co-authors found Rhododendron fulfilled all the traits of a foundation species.

Rhododendron covers approximately 30 million hectares of southern Appalachian forests, greater than the area of all five Great Lakes. Its thick, outspreading branches and bountiful evergreen leaves provide unique habitat and food for both common mammals like skunks and deer and more unusual organisms like slime molds and rare plants. Its structure shades the understory, reducing photosynthesis and the growth of other plants and seedling trees. Even its leaves impact dynamics of the entire ecosystem: their acidity and low nutrient content reduces decomposition and nutrient availability in both the forests and streams over which Rhododendron branches weave. 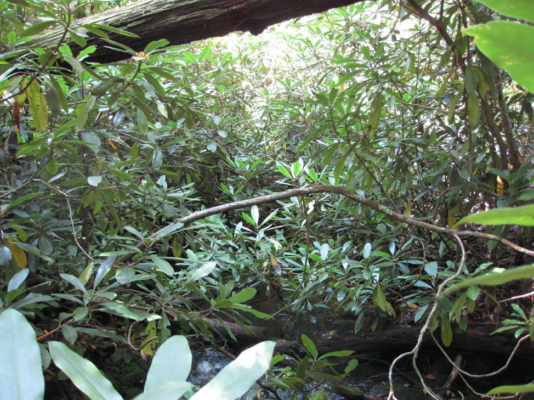 Rhododendron shrubs leave no space left unfilled as its branches stretch over the forest floor and streams.
Credit: Maura Dudley

Additionally, Rhododendron encompasses two traits that the researchers present as necessary for emerging foundation species: 1) it recently became dominant and 2) it is expected to stay dominant in the future, even after continued change further alters the environment. In fact, Rhododendron’s persistence may mediate the environmental impacts of human activity. It could reduce the spread of non-native species, maintain soil and stream water content during drought, and regulate nitrogen cycling after pollution events from runoff or deposition.

Dudley argues this is what makes identifying emerging foundation species like Rhododendron so crucial for land management.  “We understand how these species are now. But how are these things going to help under stressors that we know will be important in the future? Climate change, nutrient enrichment, and invasive species—we know those aren’t going away.”

To Dudley, this is the crux of her research—spotlighting the ways Rhododendron interacts with the ecology of this region. It is not the easiest task. Rhododendron is different from foundation species of the past. Unlike chestnut’s economic value or hemlock’s cultural and aesthetic importance, Rhododendron’s presence does not always benefit human land use. By redefining what foundation species might look like in a changing world though, Dudley hopes to remove historical biases in land management practices. “Historically people have focused on species that are often charismatic, species that people get warm fuzzies about,” she explains.

In the end, specifying the ecological trade-offs within management decisions concerning these unlikely heroes of the forest would help managers develop practices that build a strong foundation for these ecosystems—one that will last well into the future.