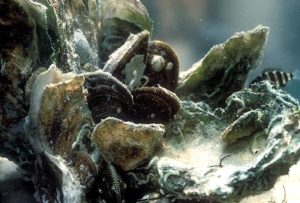 To determine whether human predation or rapidly changing environmental conditions were responsible for decreasing oyster size over time, GCE-LTER researchers measured the shell size of 3,262 C. virginica oysters across three archeological sites on Ossabaw Island, Georgia, ranging from about 2500 to about 4000 years old.

Based on shell measurements observed at each of the three sites, the researchers found that the average shell size was larger at the oldest site, and decreased significantly at the two more recent sites. However, shell size increased slightly at the most recent site, despite a significant rise in the local native population during that period. Archaeological evidence also suggests that during the Late Woodland and Late Mississippian periods (when shells were deposited at the more recent sites) natives were harvesting more oysters than before, but may have harvested from various reefs to reduce predation pressures on local sources. These findings indicate that human predation may not have been the primary driver behind the decline in oyster shell size.

The researchers found evidence of several large-scale climatic events occurring at about the same time as the more recent deposits. These included  a decline in sea level, increase in freshwater, and decrease in water temperature, all of which may have inhibited growth of oyster shells during these time periods. These findings suggest that large-scale climatic events were likely the primary driver in the decrease in oyster shell size on Ossabaw Island.

This research plays a significant role in emphasizing the importance of understanding anthropogenic and environmental changes in the past, especially within small spatial scales.

Because the sample size of this study was limited to shell deposits on Ossabaw Island, the researchers aim to expand their study to new areas in coastal Georgia and South Carolina. They also hope to do a deeper dive into how local shifts in environmental conditions caused the decrease in C. virginica shell size over time on Ossabaw Island.