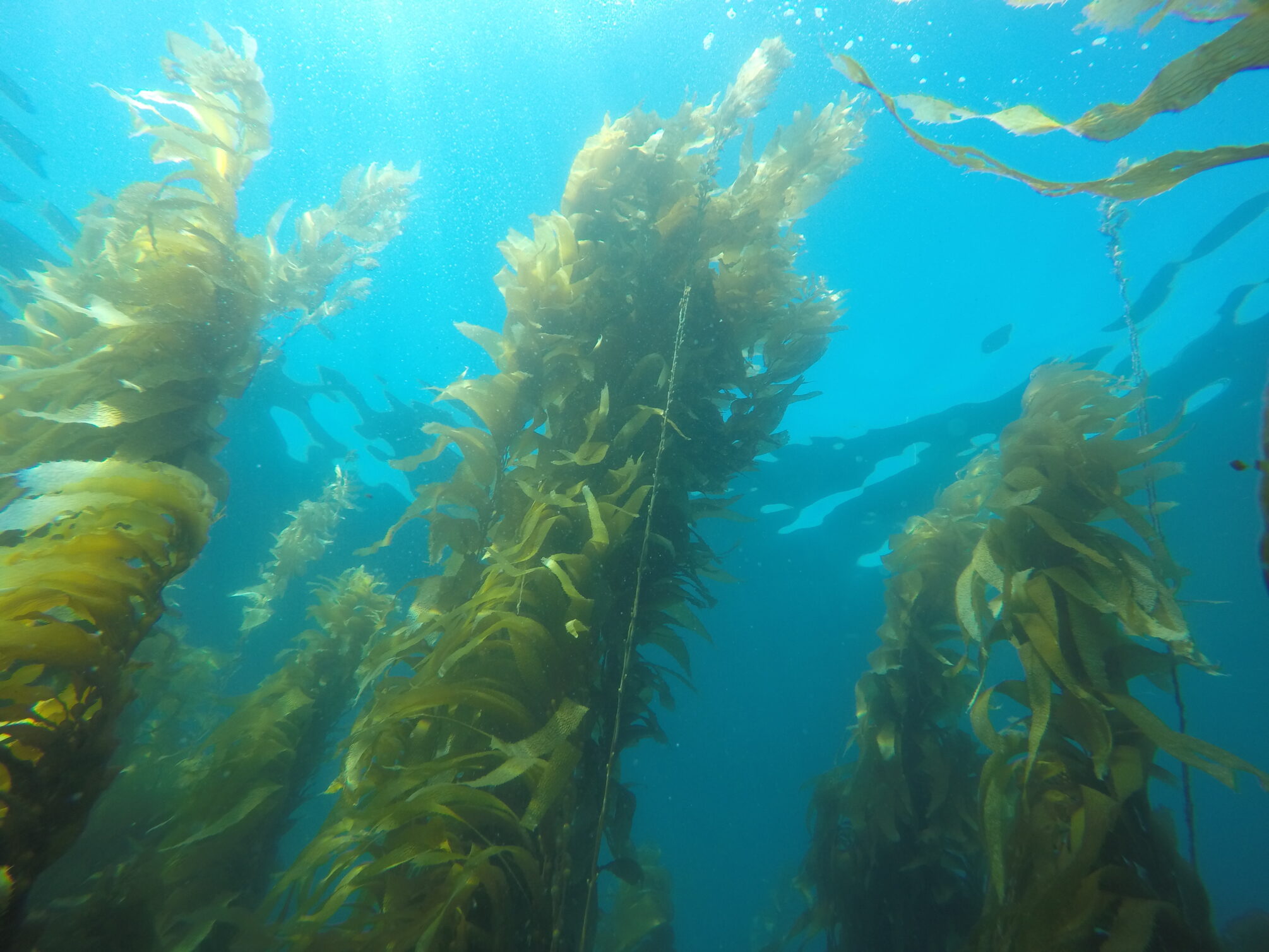 Giant kelp reaches towards the sky off of Santa Barbara. Kelp forests provide food, habitat, and protection to reef communities and are some of the most biodiverse marine environments on the planet.
Credit: Kyle Emery, CC BY-SA 4.0.

For Southern California reefs and beaches, giant kelp fuels the food web and creates an environment in which biodiversity booms. But the nutritional quality of kelp is lower than it once was, a new study from the Santa Barbara Coastal LTER shows. The culprit? Climate change and warming ocean water, coauthors Dr. Heili Lowman and Kyle Emery find.

Their work, powered by a nineteen-year dataset that tracks kelp nutrient content across a wide variety of ocean conditions, complicates a widespread belief that giant kelp is quite resilient to climate change. True, giant kelp has shown incredible spatial recovery after worrying declines following marine heatwaves. But this new research shows that biomass observations miss the full effects of climate change on kelp forest ecosystems. The repercussions of declining nutrient content are yet unknown, and the result highlights a need for further research into how food webs that rely on kelp may change in response. 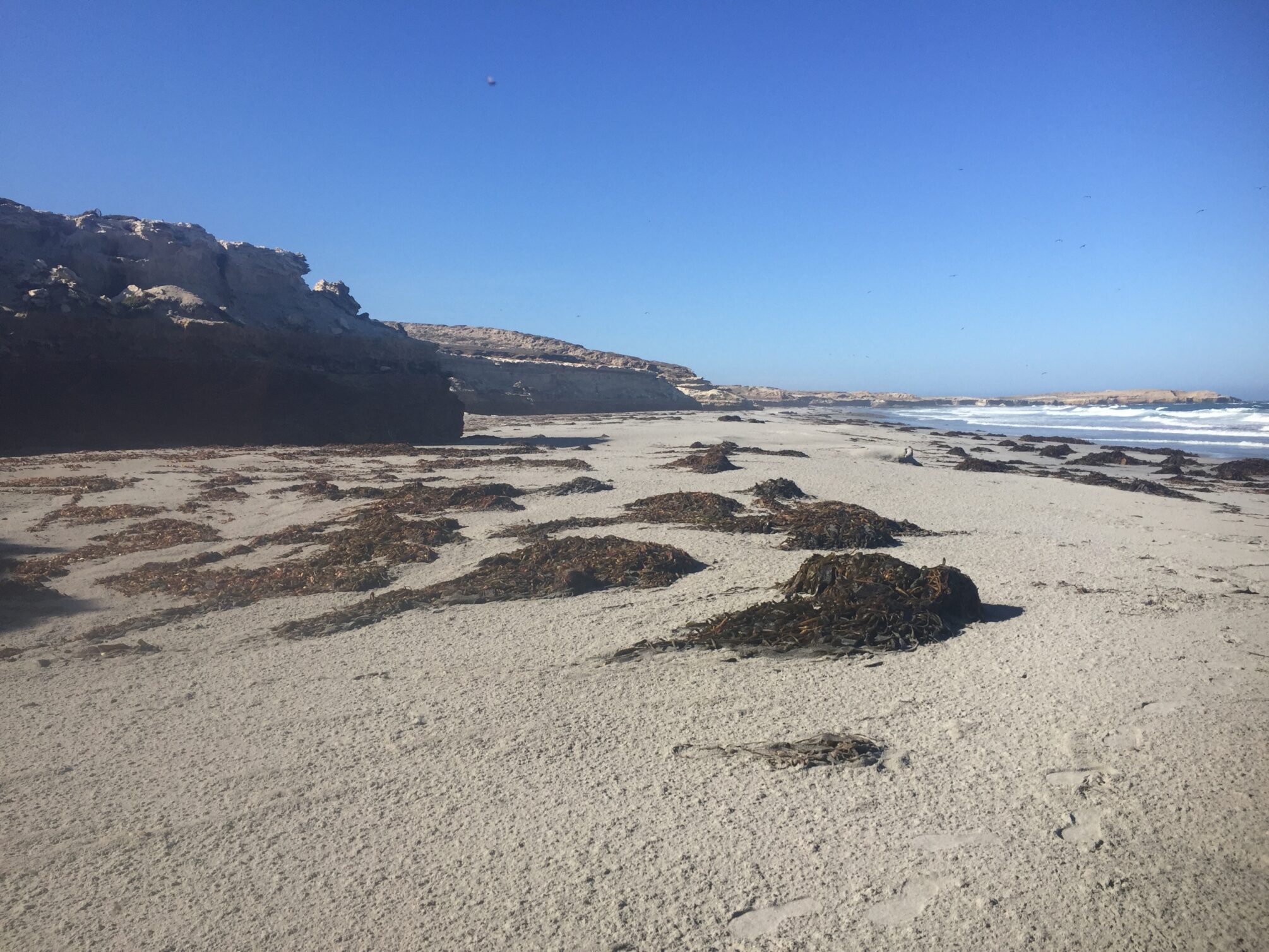 Lowman and Emery were the first to study long-term declines in kelp nutrient content using a long-term, high-resolution dataset from the Santa Barbara Coastal LTER. Without accounting for variability on both short and long timescales, it’s impossible to parse nutrient trends from natural variability. Yet all the other kelp nutrient datasets the coauthors found were shorter than a year or had very low resolution. The LTER data was collected monthly, allowing them to control for seasonal variations in nutrient content. At nineteen years long, the dataset also covered multi-year nutrient variation caused by ocean cycles like the El Niño Southern Oscillation or extreme events like marine heatwaves.

There were already many clues that suggested kelp nutrient content might be lower in a warmer ocean. For one, Lowman says, climate change increases seawater temperature while also decreasing nitrogen availability. Both increased temperature and reduced nitrogen availability were previously shown to reduce kelp nutritional content in the short term. Another, she adds, is that some researchers have found terrestrial plants across the globe take up fewer nutrients in a warmer climate, hinting that a similar pattern might hold for algae. But the LTER data let them answer the nutrient decline hypotheses definitively, in a real ecosystem, for the first time.

Nitrogen is at the whim of the ocean

The coauthors also searched for what might drive kelp nutrient variability in their data. “The strongest correlation we found was with local sea surface temperature,” Lowman says. In warmer water, she explains, there’s just less nitrogen available, limiting the potential nutrient uptake of kelp. “But we also found correlations with larger climatic indices,” she adds, including the North Pacific Gyre Oscillation (NPGO) or El Niño Southern Oscillation (ENSO). These indices include a whole host of oceanographic conditions, and are also changing in magnitude and character due to climate change.

As a result, Lowman and Emery expect kelp nutrient content to continue to decline with continued warming. Seawater temperature is expected to creep upwards due to climate change, and nutrient content will likely continue to decline in response. But the climatic indices respond in more complicated ways. The NPGO, for example, is significantly more variable than it was in 1950, and extreme ENSO years are expected to increase in frequency under climate change. Extreme years might cause kelp to show periods of uncharacteristically high or low nutrient content, magnifying the ecosystem repercussions of the simultaneous slow nutrient decline caused by temperature increase. 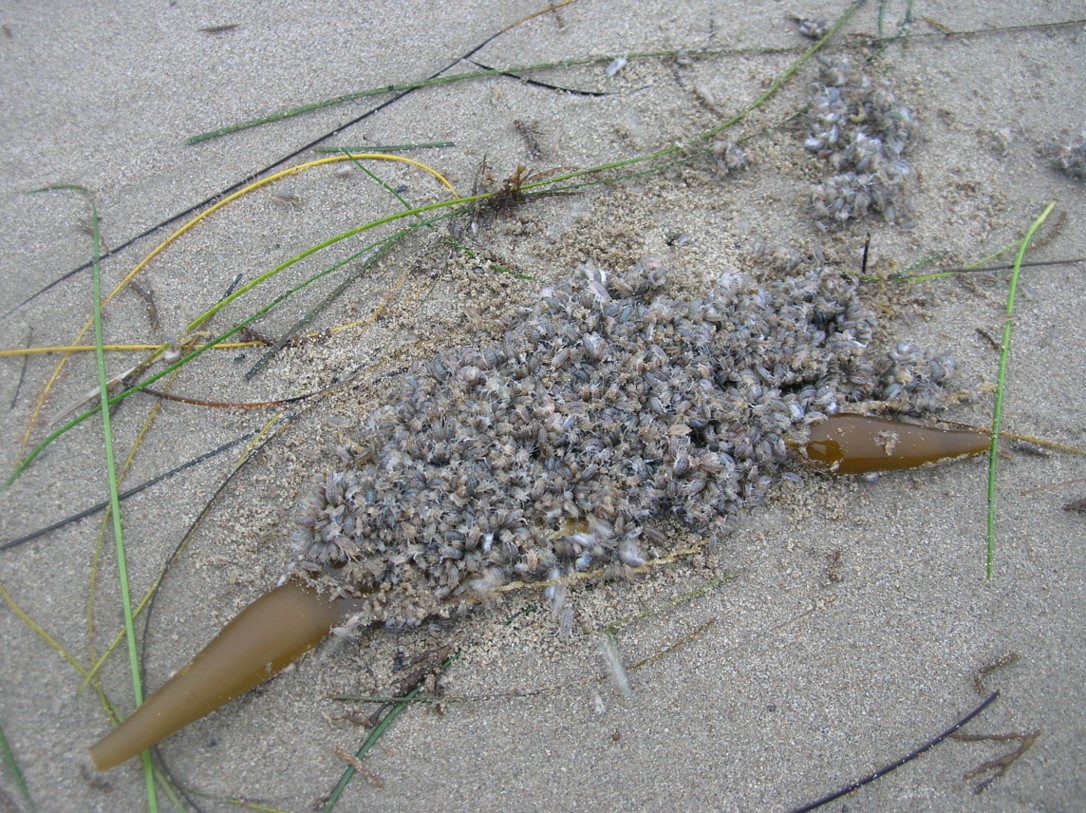 Sand hoppers, crustaceans that spend the majority of their lives on the sand, swarm a giant kelp blade. Beached kelp is their main source of nutrition, and less nutritious kelp might have severe repercussions for beach communities.
Credit: Kyle Emery, CC BY-SA 4.0.

The declining nutritional quality in kelp could have implications across entire marine food webs. A lower nutrient content, Emery warns, means that consumers may need to eat more kelp to get the same amount of nutrients as before. Kelp powers two main food webs: the reef ecosystems offshore, and beach communities that feed on washed up kelp. With fewer nutrients in the same amount of food, consumers might eat more kelp or seek other food sources. As a result, the decline could restructure either reef or beach food webs and impact important communities like fisheries or shorebirds.

But Emery adds that the true impacts of this change are unknown, as further research needs to look at how kelp food webs might respond to a less nutritious foundation species. “This hidden effect of the nutritional quality shifts are a red flag,” Emery warns. “We haven’t lost the kelp—it’s persisted through these warming events that we’ve had—but there are really consequential impacts still happening.”

The Santa Barbara Coastal LTER started monitoring kelp nutrient content well before Lowman or Emery ever set foot on a research vessel. “Twenty years ago, folks might not have been interested in or wanted to ask this question just yet,” Lowman says. But when she came up with the idea for this study, “lo and behold, the LTER already had this perfect dataset sitting there.”

This study highlights one of the great strengths of LTER research, with a long-term dataset spurring a flurry of research activity and answering unforeseen questions decades after its inception. In addition to the data, Lowman says, working with the LTER gave her “access to people, like Bob [Miller] and Jenny [Dugan], who have been working in this system for the same amount of time.” When long-term data meets generations of experience, LTER scientists like Lowman and Emery can answer pressing ecological questions as they arise.