Can corals ride the tide of climate change?

Corals are already experiencing intense climate change impacts, making them some of the world’s most recognizable poster-children for biodiversity conservation. Ecologists and nature lovers alike want to know whether corals are resilient enough to persist in oceans of the future. New research from Mo’orea Coral Reef LTER has found that some corals and coralline algae may inherently be able to resist ocean acidification, but don’t appear to acclimatize to it.

Ocean acidification occurs when carbon dioxide concentration increases, causing seawater pH to decrease. Seawater chemistry — specifically pH and dissolved inorganic carbon —  affects how species that build calcium carbonate skeletons access the compounds they need to grow. While all hard corals have this in common, some have calcification pathways that may be more susceptible to ocean acidification than others. The Mo’orea team, led by Dr. Steeve Comeau, tested the effects of acidifying ocean conditions on four coral and two coralline algae species during a year long experiment in the South Pacific. 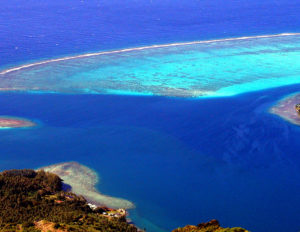 In other words, the team found that corals and algae had species-specific responses to changes in seawater chemistry that occurred rapidly and persisted over the entire year. They found no evidence that the study species acclimatized to acidifying conditions over time. Potential coral resistance to ocean acidification could be promising, but it does not necessarily mean that it can be sustained over long periods of time, nor does it mean that corals have acclimatized to ocean acidification. If corals were acclimatizing, they would be able to sustain normal growth even as they adjusted calcification in response to decreasing pH. If traits associated with this response were heritable and passed on to subsequent generations of coral, that would be true adaptation.

To learn more about these distinctions, researchers will need to investigate the calcification pathways of other coral species, the limits of pathways that appear to be resistant to lower pH, and whether species can resist ocean acidification over long periods of time or multiple generations. However, according to Comeau and Cornwall, these aren’t the most pressing questions that need to be answered. They assert that it is still most important to determine “whether or not species such as corals or coralline algae can gain tolerance to ocean acidification, irrespective of the mechanisms responsible.”

The details and mechanisms aren’t trivial, but knowing whether there are corals out there that can acclimatize, maybe even adapt, to ocean acidification will give scientists and managers a sense of which species may be able to persist in changing oceans — knowledge crucial to protecting coral reefs and coralline algae in the long term. Luckily, Comeau and Cornwall plan to continue long term experiments in France and New Zealand on how climate change affects corals and coralline algae. In Mo’orea at least, corals didn’t appear to acclimatize to acidifying conditions, but the search for species capable of doing so continues.