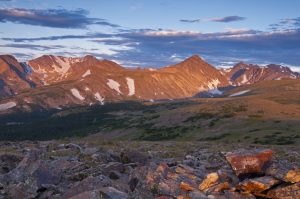 High elevation and high latitude ecosystems are particularly vulnerable to climate change impacts because they represent the upward range limits for organisms that are adapted to cold temperatures and low nutrient levels. Two of the biggest threats to high elevation communities are nutrient deposition (e.g. nitrogen) and climate warming. A new study by Bueno de Mesquita et al. from Niwot Ridge LTER examined how these threats may affect nutrient limitations for microbial communities in sparsely vegetated areas of the Colorado Front Range, with consequences for nutrient cycling in the surrounding ecosystems.

The team found that microbial activity and growth in the mostly plant-free mountaintop ecosystem of the Niwot Ridge LTER site is primarily limited by phosphorus (P). In contrast, vegetated soils in the same watersheds showed more balanced P, nitrogen (N), and carbon levels. In microcosm experiments, P additions led to increased growth rates and percent cover of phototrophs (bacteria and algae that photosynthesize), whereas N additions decreased the relative abundances of phototrophs. The findings corroborate findings by other Niwot LTER researchers (Darcy et al. 2018) that showed P limitation in similar habitats of Alaska and Perú.

The combined effects of increased nutrient loading and warmer climate on microbes living in plant-free areas with undeveloped soils could be a double blow for sensitive high elevation areas. Nitrogen deposition arrives at these elevations via surrounding industrial and agricultural activities (e.g., from car and truck exhaust and excess fertilizer application). Phototrophic microbes become active in high-elevation soils during the short, late-summer growing season. This brief window of photosynthetic activity provides as much carbon to this system as wet and dry deposition combined. Decreasing snowpack duration, however, could increase the proportion of time during the year that is dominated by phototrophs, with potential consequences for carbon accumulation in the system.

Together, the study’s findings suggest that the colonization of high elevation ecosystems impacted by N deposition and climate warming will likely be constrained by P limitation of both heterotrophic and phototrophic microbes and by negative impacts of N on microbial phototrophs. These effects may in turn limit the ability of these fragile ecosystems to immobilize inputs of atmospheric N, causing increased runoff of excess N to downstream ecosystems with widespread ecological effects. This important work is contributing to a new paradigm that shows phosphorus limitation is more significant than nitrogen limitation early in ecosystem development in cold and dry regions across the globe.