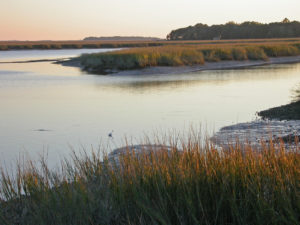 Coastal freshwater marshes exhibit a specific set of conditions that allow them to effectively store nitrogen and carbon as well as purify water, but climate change is rapidly changing those conditions. A new study shows that chronic additions of dilute saltwater into a freshwater marsh—as is likely to happen from rising sea levels—affected the nitrogen processing in a simulated tidal freshwater marsh that changed the ecosystem from a net nitrogen sink to a net source.

Researchers from the Georgia Coastal Ecosystem LTER site investigated the possible effects of both episodic and long-term saltwater intrusion on coastal freshwater marshes by simulating press and pulse treatments of dilute seawater. Through recording soil attributes of field plots for three years, the team was able to determine that continual saltwater intrusion from press conditions were disastrous for the ecosystem while pulse conditions allowed the ecosystem time to recover. Their results suggest that where saltwater continues to intrude on freshwater marsh systems over long time periods, the potential of coastal marshes to help mitigate climate change through carbon sequestration is lost.

The study was built on a section of a tidal freshwater marsh adjacent to the Altamaha River, about 50 meters from the main channel of the river and about 15 kilometers upstream from the mouth of the river. The team simulated press conditions by giving press condition plots additions of dilute seawater (15 ppt) four days per week year round, while the pulse condition plots received seawater only for two months of the year, receiving river water the rest of the year.

Since marshes play a key role in flood prevention as well as water purification through nitrogen removal, this study is crucial in planning for future landscape changes triggered by sea level rise. Tidal freshwater marshes are major junction points of water, soil, and vegetation, so the study involves researchers from various fields. Additionally, the researchers expect further changes to play out over the next several years.

“It was the kind of project that could only be done by a LTER site,” says co-author Steven Pennings, a plant ecologist at the University of Houston, “a big experiment with a projected duration of around a decade, drawing in scientists from several disciplines.”

As saltwater changes the functionality of marshes, eutrophication can occur, together with a replacement of freshwater plant species by brackish or saline plant species. The researchers also found that through press additions of dilute saltwater, or enduring intrusion, soil chemistry and porewater attributes changed drastically; increased ammonium, nitrate, and toxic sulfides levels were observed, reducing plant productivity and storage of nitrogen and carbon.

The authors were able to come to a more hopeful conclusion that there is a potential for resilience when seawater intrusion is only temporary (pulse), as in the case during droughts or hurricane events. This simulation provides information about two extreme situations — very short-term intrusion and continuous saltwater inundation. Experiments of varying duration in then future will allow researchers to better quantify the effect of gradual sea level rise on these important ecosystems.