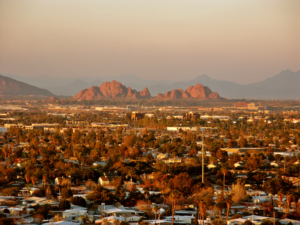 Anticipating the needs of cities in the future is a key aspect of urban sustainability. One approach to planning for sustainable cities is for researchers and practitioners to work together to develop scenarios that benefit communities as well as ecosystems. Central Arizona Phoenix LTER (CAP LTER) is taking an innovative approach to urban research by co-producing sustainable future scenarios (SFS) with Phoenix city planners, decision-makers, and community leaders as a tool for long-term urban sustainability. In addition to ASU researchers, the effort involved  a total of 17 participating institutions, including governmental and non-governmental organizations.

A scenario in this context is a reasonable narrative about the future. The scenarios the team developed are plausible in the sense that a future scenario emerges from past and present-day conditions. The team considered three types of scenarios, stretching to 2060, to help them plan a sustainable future for Phoenix: strategic, adaptive, and transformative. The ideal outcome from this project is to explore sustainable future scenarios and implement these scenarios into current city legislation in cities around the world.

Strategic scenarios look at what plans and policies the city has already established. These come in the form of governance (government, non-profit, and community) plans that the working group can explore to see what implications of these futures might might be. Strategic scenarios set the stage for a more ambitious way of thinking that leads to the other two types of scenarios.

Adaptive scenarios create strategies that respond to specific challenges using mixed forecasting and backcasting approaches. For Phoenix, the three environmental challenges were flood, drought, and heat, as these were the most prevalent to the city. Think of it as “what can we do today to address extreme events that might happen in the future.” Three scenarios each took one of the challenges into consideration and created pathways that had plausible outcomes to combat that challenge by 2060. For example, to combat drought, larger, centralized water infrastructure will gradually increase to capture and bank water. This way, by 2060, residential, commercial, and industrial uses capture greywater and rainwater for future banking to increase water security.

Transformative scenarios use a backcasting approach to explore what could be normative futures based on sustainability goals of radically transformed futures. This approach addressed the same environmental challenges as the adaptive approach, but each scenario addressed all three challenges.. In one of the Phoenix scenarios, the team created a concept called “Emerald City” which has a decentralized infrastructure for stormwater capture where urban density and vegetation can be concentrated. Seventy-five percent of the major freeways are converted to “green ways” by supporting a multi-modal transportation network of light rail, bicycle, and pedestrian infrastructure.

“They are not business-as-usual scenarios, but instead are based on goals that have been set in preceding planning documents and the values, needs, and desires of the participants. The uncertainties that are associated with these scenarios aren’t viewed as barriers, but as opportunities to explore ways to intervene,” Dr. David Iwaniec, lead author and Assistant Professor of the Urban Studies Institute, Georgia State University.

This process of creating sustainable future scenarios is part of a greater urban research network called Urban Resilience to Extremes Sustainability Research Network (UREx SRN). They started working with CAP LTER to use Phoenix as a model city with extreme climate challenges that needed to be addressed. Researchers on the project are currently working in a number of other Latin and North American cities to create a unique set of scenarios for each city. When there is an opportunity to implement strategies (i.e. during a disaster), it is best to have scenarios ready. The hope is to have a detailed enough vision for a sustainable resilient design, so the city doesn’t have to build back to what has happened in the past. Dr. Iwaniec states, “Long-term futures aren’t about the future, they’re about today.”